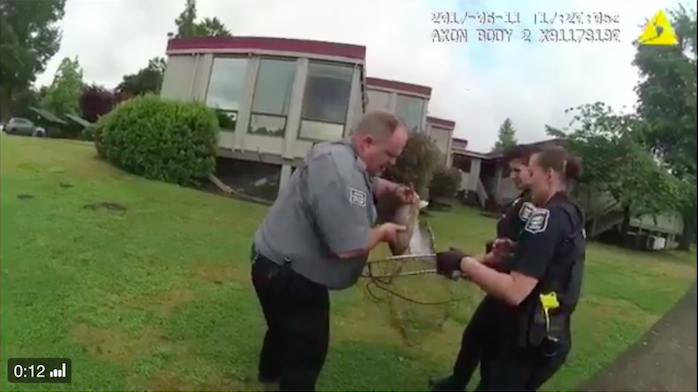 This time of year, duck rescues become a routine call for many police services.

Take the North Vancouver RCMP, for example. Over the weekend, officers were called about five ducklings crossing busy Highway 1.

Just east of the Lonsdale exit onto Highway 1 on Saturday, they found the ducklings in a perilous position amid traffic.

“A passing motorist had corralled the five ducklings that appeared in distress without their mother being insight,” Mounties said yesterday. “Unfortunately, all efforts to locate the mother duck were futile. The five little ducklings were then scooped up and placed into the rear of the police vehicle for safety.”

Not the usual folks placed in the back of a cruiser.

The group found them to be Mallards and in good health.

Then on Sunday, police in Eugene, Oregon rescued in a duck in distress.

A duck caught on a fishing hook was spotted by a fisherman in at the Alton Baker Park Canoe Canal.

That’s when police used some ingenuity — and fishing smarts — to save the wayward waterfowl.

“Officers on-scene discovered a mallard hen with her beak snagged on a fishing hook and line, and struggling against a branch the line was tangled in,” police said.  “As they sought a creative way to assist the tiring duck damsel, it was apparent that the depth of the canal and length of the branch posed safety challenges to the officers.”

One officer grabbed some personal fishing equipment. Police were able to safely untangle, capture and remove the hook from the duck to set her free.

The entire encounter was captured on an officer’s body camera.

Video from incident on Sunday when officers were called to help a duck caught in fishing line/hook at Alton Baker https://t.co/dqPbFEa9Js pic.twitter.com/sVG1EwaKr9

The Register-Guard covered the incident asking officers whether freeing a single duck worth police time on a Sunday morning?

“It’s Eugene,” Officer Jannalyn Farley told the newspaper. “How could we not save a duck?” 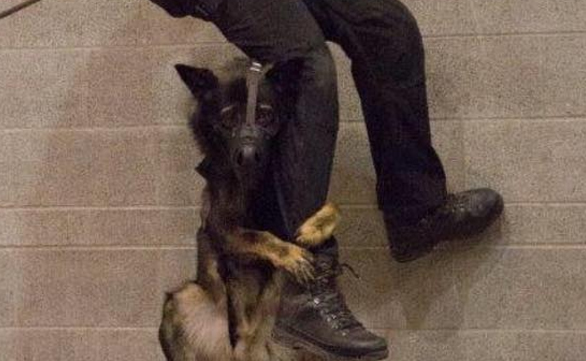 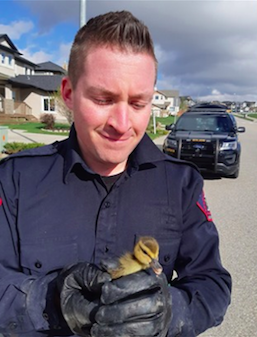