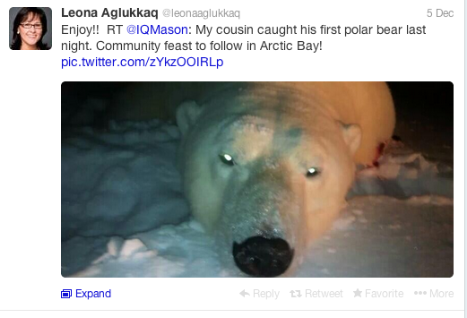 Canada’s Environment Minister shows us once again how tweeting can get you into trouble.

Leona Aglukkaq retweeted a picture of a dead polar bear, which was to be part of a community feast in Arctic Bay. Aglukkaq, who hails from Nunavut, used Twitter to express her feelings about the animal kill.

“Enjoy!!” she wrote while retweeting of this post: “@IQMason: My cousin caught his first polar bear last night. Community feast to follow in Arctic Bay! pic.twitter.com/zYkzOOIRLp”

Then, she was hit with a storm of criticism and support. Aglukkaq returned to Twitter to defend herself.

“I will continue to stand up for Inuit and Northern communities who rely on the polar bear hunt,” she wrote. And, “Polar Bears are culturally, spiritually and economically important for northerners.”

Aglukkaq, of course, also ruffled feathers earlier when minimized the impact of global warming in a series of interviews, suggesting residents in the North are reporting a lot of polar bears on the ground. Polar bears are listed as a species of special concern in Canada.