Afghanistan: Dogs of War is a feature in the latest issue of The Atlantic and it’s a stunning photographic tribute to service dogs in action.  In its collection of 40 photos, some taken by military personnel others by professional journalists, the magazine demonstrate how coalition troops in Afghanistan “relied on thousands of military working dogs to help keep them safe, and make their jobs easier.” Some dogs find explosives, others sniff out illicit drugs or track down enemy combatant, while others find missing allies.

“Not only are they active on the front lines, but behind the lines they serve as therapy dogs, service dogs, and loyal companions. They also share the same risks as the ground troops, suffering injuries and sometimes death on the battlefields,” the magazine notes.

The main photo on this post shows 1st Sgt. Dean Bissey, first sergeant for Company C “Dustoff”, 3rd General Support Aviation Battalion, 82nd Combat Aviation Brigade, hooking the hoist harness to Staff Sgt. Michael Hile and his military working dog Rronnie from 554th Military Police Company. It was taken near Bagram Airfield by U.S. Army Spc. Aubree Rundle. Make sure you check out The Atlantic to see them all,  but here are a few we gathered taken by U.S. military photographers.

The photo below shows U.S. Army Sgt. Adam Serella, who is a narcotics patrol detector dog handler with the 3rd Infantry Division, taking time to bond with his dog, Nero. Local children look on during Operation Clean Sweep conducted in districts throughout Kandahar City. It was taken by U.S. Army Spc. Tyler Meister.

The next photo shows a flight medic with 2nd Battalion, 3rd Aviation Regiment, being hoisted into a medical helicopter with military working dog, Luca, with 4th Stryker Brigade Combat Team, 2nd Infantry Division during a training exercise at Forward Operating Base Spin Boldak. It was taken by Sgt. Michael Needham. 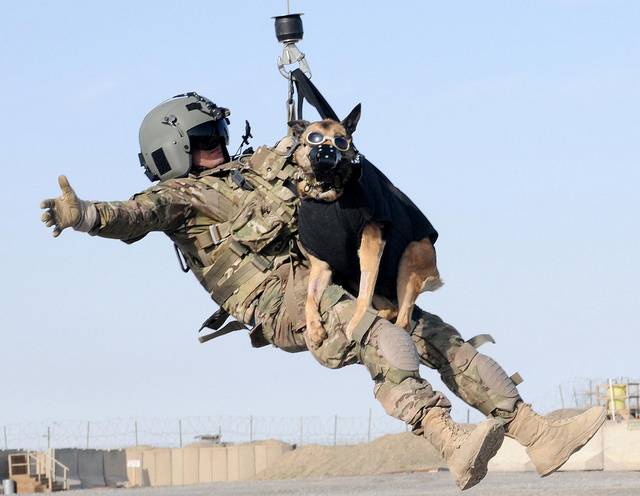 And in this one, rangers from Headquarters and Headquarters Company, 3rd Battalion, 75th Ranger Regiment and a multi-purpose canine pause during a nighttime combat mission in Afghanistan. 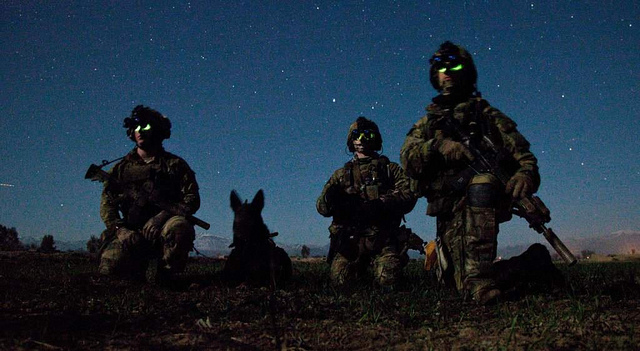 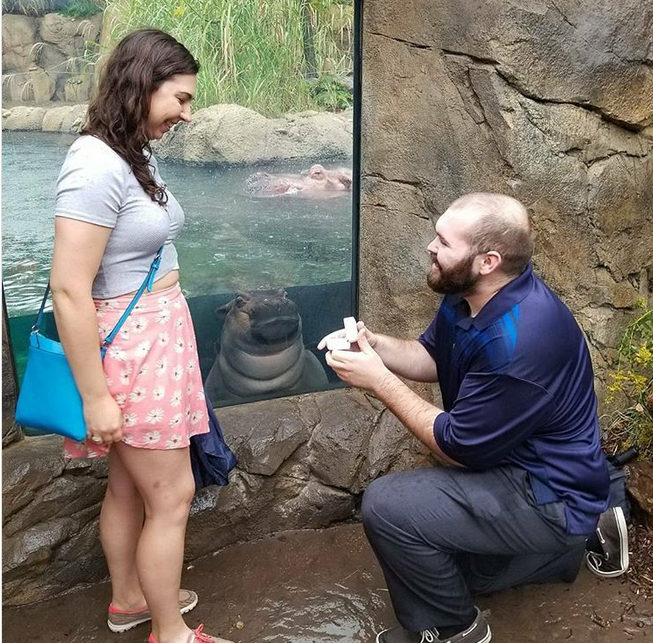