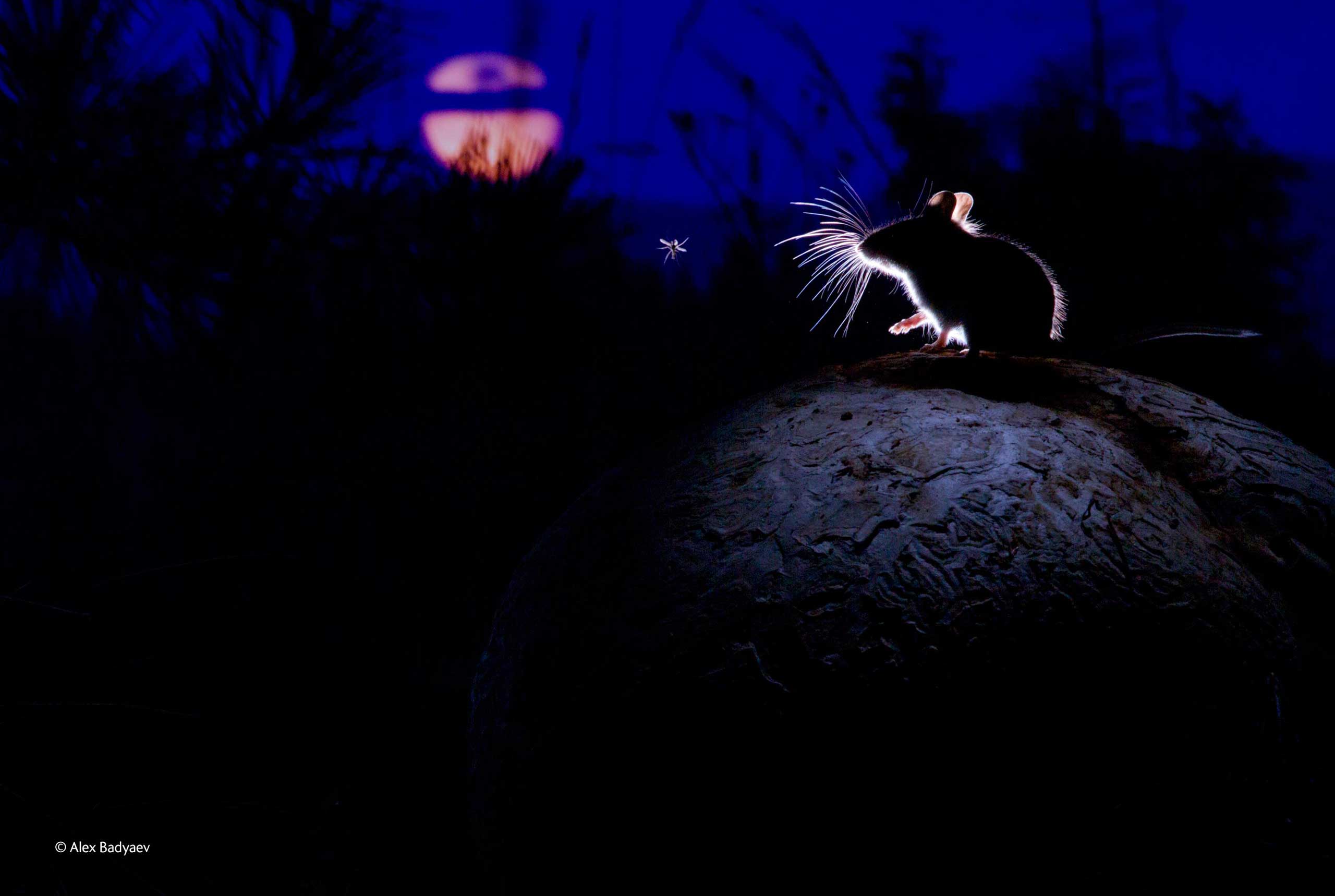 The Wildlife Photographer of the Year is in its 50th year this year. The competition showcases the very best in nature photography.

The competition is put on by two UK institutions–the Natural History Museum and BBC Worldwide.

The categories include: mammals, birds, amphibians and reptiles, invertebrates and underwater species.

In the  mammals category: The Mouse, the moon and the mosquito.

The photograph was taken by Alexander Badyaev, Russia/USA  who was taking his daily hike along a trail in the Blackfoot Valley, western Montana, USA, when he noticed a giant puffball mushroom starting to inflate.

Squirrels, chipmunks and mice began exploring and scent-marking the surface of the oversized fungus leaving it covered with tiny prints.

Alex returned to the spot during a full Moon, when the puffball had reached its maximum size. He lay on the ground, watching and waiting, entertained by the dozens of small animals exploring the puffball.

The most frequent visitors were deer mice, which scampered around, sometimes pausing to check on their surroundings. To avoid disturbing the animals, and to preserve the sense of place, Alex used the Moon as his backlighting. He relied on a long exposure and a gentle pulse of flash to show the curve of the fungus and to capture the frantic activity. When one deer mouse paused for a moment to investigate a persistent mosquito, the perfect midnight puffball scene was created.

In the amphibian category: Divine Snake

In this case one slithered just a few metres away from Raviprakash’s front door in Karnataka, in the heart of the Western Ghats.

The snakes are attracted by the lizards and frogs that shelter among the vegetables and flowers in his garden. Raviprakash has learned to identify the snake by mastering the skill of finding them amid a mass of green.

This snake appeared to be a plant at first glance – it was even swaying in the breeze.

‘A vine snake tends to spend a considerable amount of time in the same location,’ says Raviprakash. ‘It will wait for prey with divine concentration,’

The snake freezes in position once it has its prey in sight. The main challenge was to show the snake from this unusual perspective, without disturbing its concentration.

The green vine snake is one of the most beautiful creatures I have ever seen. Each time I photograph one, it looks ever more beautiful.’