It seems the Mounties always get their kid.

At least, it was for the RCMP in Warman, Saskatchewan the other day when officers cracked the case of a missing kid, or rather, goat, who wandered off a Tim Hortons. This is Canadiana at it’s finest, folks. Right down to the press release, headlined, “Goat has busy night out on the town,” which we reproduce for you here.

“Early Sunday morning two Warman RCMP members were called to a business for a disturbance. There was a stubborn goat refusing to leave the establishment. The employees would ask him to leave and walk him outside, but he would just turn around and come back in through the automatic doors.
The members believed he was just cold and he decided to lie down and wanted to sleep in the entrance. He was “arrested” and escorted into the police vehicle. He was very unhappy with this so the members decided to take him home instead of to holding cells at the detachment.
After knocking on every farm house north of Martensville, members were not able to locate his house. Members contacted Animal control, but learned that they typically don’t deal with goats.
Members transported the goat to an animal hospital until his owners could be located. We are happy to report that the goat is safe and sound back with his owners after his adventurous night out on the town.”

The police even created some memorable memes. 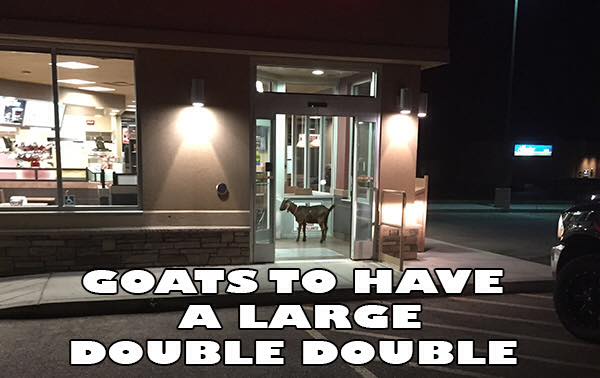 Which of course touched a chord on social media.

The National Post reported that folks with the University of Saskatchewan Rodeo said the animal escaped from their event, which was being held in Martensville. Then, The Canadian Press reported the goat was actually kidnapped as a foolish prank.

The university’s rodeo team posted this update on Facebook.

“Goliath the goat is famous! Our beloved goat that belongs to the Lakeland College was “kid”napped from the 4th Annual U of S Rodeo on Saturday night. After 24 hours of searching and heart breaks, Goliath was found! The RCMP picked him up from the Tim Hortons in Martensville, SK. They took very good care of our celebrity and Goliath is now reunited with his owners. His two best friends, Sparkles and Billy the Kid missed him very much! As funny as our little Goliath visiting Tim Hortons is, this story could have gone in a not so happy direction. Since this is livestock, we take this very seriously. Fortunately Goliath had a happy ending and made fast friends with the RCMP who rescued our “kid”napped friend.” 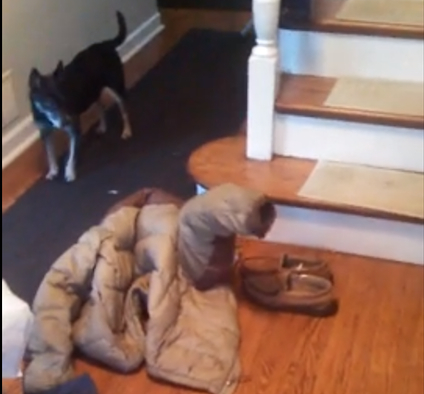