Back in August, Noah’s Arks Rescue was called in to help a puppy that could not walk. The animal, which was taken to the Okefenokee Humane Society in Waycross, Georgia, was going to be euthanized the next day.

But Jennifer Smith, who is president of the Noah’s Arks, a South Carolina-based non-profit, which offers emergency medical care to abused animals, stepped in to save the six-week old West Highland terrier mix named Lamb Chop. The pup was likely dumped by a breeder.

“The way she was brought in was no life for a puppy. After lots of e-mails, I knew I had to save this puppy. She was full of energy and Life and even if she never walked, she deserved to live. I was already designing a quad cart in my mind where she would be able to walk with those spinning legs of hers,” Smith wrote.

An MRI and spinal tap revealed severe case of hydrocephalus, an expansion or abnormal dilation of the ventricular system due to an increased volume of spinal fluid. The fluid was slowly removed from her spine and brain. She was then moved to a hospital in Savannah, Georgia to have access to various forms of rehabilitation and acupuncture. She has been taking baby steps at improvement.

Then, this month, a special cart arrived to allow Lamb Chop to build up leg muscles. And, the results are incredible. 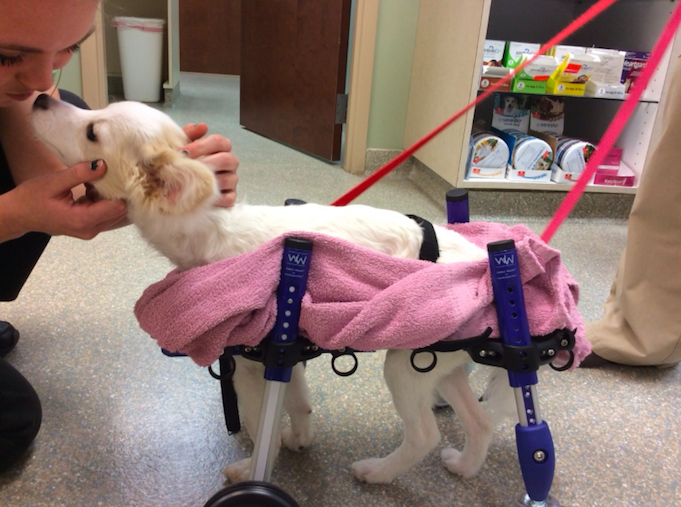 “I never dreamed we would still be working on this adorable little Lamb Chop, but we are,” Smith wrote in her most recent update. “We have to see this through to the end until she is getting around on her own. We have posted several videos that will put a smile on your face and bring tears to your eyes.”

“Wake up WORLD and watch our little girl RUN around.”

The organization is taking adoption applications from families that are within 60 miles of Savannah so Lamb Chop can remain close to specialists.

While you are checking out the organization, look at the other animals that are available or consider making a donation.