And for three days, Nom Chompsky was missing after a flight from Ottawa to Vancouver where Bishop lives. Bishop, a University of British Columbia linguistic student, had no idea where her gecko went and for days, the airline Westjet, was no help.

Bishop realized Nom–who she calls Nomster–was missing when she went to pick him up at the Vancouver International Airport’s cargo warehouse section.

When Westjet wasn’t able to help, Bishop turned to her Facebook asking the public to help put pressure on the airline.

This is Nom. Nom is a Gargoyle Gecko. She’s still a juvenile, only 11 months old, 5″ long snout to the tip of her tail, and under 30grams. 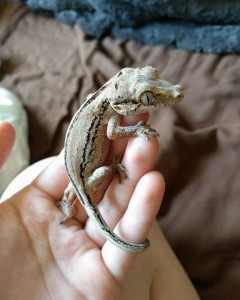 I had called WestJet 3 times to see if I could bring her with me into the cabin. I was told no, I must ship her through Cargo. Since all my other options were closed on Sunday’s, I had no choice.

So, on Sunday, I took flight 703 with WestJet, with her in cargo, from Pearson Intl. to Vancouver Intl. I had dropped her off with GTA Worldwide at 5:15am, and headed off to catch our non-stop, direct flight.

The reason for this flight, and why she was being shipped in the first place, is because I was moving from Ottawa to Vancouver alone.

After getting off of the plane 5 hours later, collecting my bag, I asked one of WestJet’s staff where I could go pick her up.

I was given the wrong address, and had to call their cargo hotline. No big deal, but I was a little miffed that I was given incorrect information and she was going to have to wait longer for me to pick her up.

2 hours after disembarking, I’ve reached WestJet Cargo location at Vancouver Intl. There, I waited over half an hour before being served.

This is when I was finally told that her box was missing.

So I’ve been calling. And calling. I was told a tracer was sent out, as well as an alert, and that all the cargo holds would be looking for my little girl.

At 8:30 PST last night, a representative I was speaking to had called Pearson Intl., where she found out that 8 hours after I had been informed of her being missing, a sweep for her STILL HAD NOT BEEN COMPLETED.

This isn’t baggage, this is a package containing a live animal. This should have been done AS SOON as the information was sent out.

I was also told that she may have been sent to a warehouse not open, and therefore not available for me to pick up on the same day, as I was promised.

It has now been more than 24 hours. She is still missing, and WestJet , despite bringing it to the highest level, has no information on her. 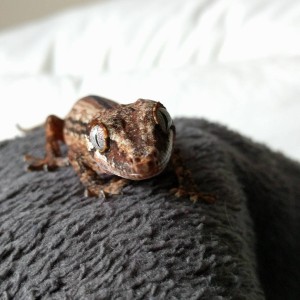 At this point, I’m doubting that she will be alive. Reptiles are often shipped using overnight express, in order to avoid high heat, and to prevent them from being cooped up too long. Her wet paper towel to keep her cool, and to give her water, has definitely dried out by now.

Thirty-six hours after that post, Bishop said she had not heard anything. Nom was placed on the plane and apparently vanished.

I’m beyond heartbroken, which most of you know. Nom means the world to me.

Bishop wrote that she gave the airline permission to open Nom’s shipping container on the chance that she was still alive.

Then Bishop found out that they had found her gecko.

My little Nomster is alive and well. A little skinnier than when I had her last, but she’s a little piggy so it won’t take long for her to get that weight back.
I’m elated. She’s not going to be put down for a good little while.

Somehow Nomster survived with no food and little water since she was placed in the cargo hold of a plane. All Nom had was a damp paper towel placed in her carrier to keep her cool and create some humidity.

She was found in the baggage department. Westjet has not given detail information about what happened. 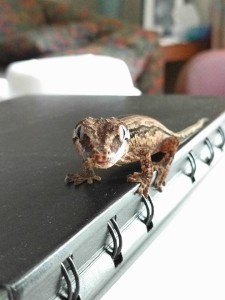 Bishop hopes her missing gecko prompts the airline to change its policy to allow some pets to travel with their owner.

Something needs to change so no one else has to go through the heartbreak I’ve been going through, and no animal should have to end up lost, alone, and dying due to someone else’s lack of care.