This could have turned out much worse.

But Alberta Fish and Wildlife officers recently came to the rescue of an elk tangled in 50 metres of wire fencing, including wayward logs it was dragging around.

Residents in the Rocky Mountain community of Canmore recently brought officers to a spot in town where the elk was struggling as it antler were entwined in wire. Officials immobilized the animal, cut the fence and put the elk into a “recovery position to help it breathe.” 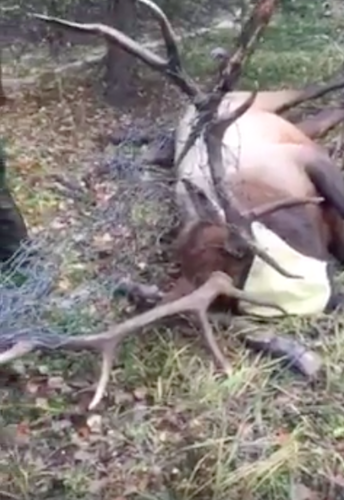 “While the fence was stuck in the bull elk’s antlers, it also entangled a few logs, which the animal was then forced to drag,” officials said. “To add to the animal’s stress, it is currently mating season, which means it must compete with other aggressive males. Not all animals are able to recover from this kind of situation, but in the end, this elk did quite well, and officers watched it walk back into the wilderness.”

While there isn’t a video of the animal getting up and walking away, you’ll nonetheless see, this is indeed one lucky elk.