Orphaned baby elephant Chhouk was found wandering alone in the forests of Mondulkiri Province in Cambodia, badly emaciated and with his left front foot missing.

When he was found, rescuers surmised Chhouk’s foot was damaged from injuries sustained from a poacher’s snare. While the poachers hadn’t killed Chhouk, the snare had left the baby elephant, who was about two years old when rescued, terribly damaged.

Wildlife Alliance rescue manager Nick Marx went up into the forest with other rescuers and stayed with him.

I quieted him down, slept with him in a hammock beside him and after 10 days he was calm enough to make the journey without injuring himself. 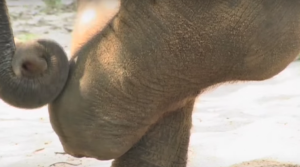 But with the foot missing, rescuers noticed that there could be more lasting damage if something wasn’t done.

We feel if he doesn’t have more balanced on his left side it will throw his structure maybe deform his spine.

3D appendages have changed the well-being of critters. We wrote about a footless rooster last year being helped by new  3D printed feet  and Derby the dog who was able to run again thanks to 3D prosthetics

But for Chhouk, fitting him with a new leg required something bigger than 3D prosthetics.

That’s when the Cambodian School of Prosthetics and Orthotics stepped in. Cathy McConnell, CSPO management team leader said her staff was asked if they could see if a prosthetic could be made for the baby elephant.

We decided to volunteer our spare time to see if we could make a prosthetic for Chhouk.

Working with a veterinarian, an x-ray was taken to see where damaged tissue may be and a cast was made of Chhouk’s front leg.

A soft foam inner socket was designed and then an outer cast of propylene was made.

When it came time to put the cast on, volunteers and rescuers weren’t sure exactly how Chhouk would take to it. But he needed no sedation throughout the whole process and all that was required to distract the baby elephant was a steady stream of bananas and turnips.

Once the cast was on, which took about 30 seconds, Chhouk’s gait changed markedly.

His keeper says the elephant doesn’t want to be without his prosthetic foot.

Today, Chhouk is a healthy bull elephant, able to take long walks in the forest, frolic in the pool, and play with his adopted big sister Lucky.