Taronga Zoo in Sydney is celebrating the birth of its first Meerkat pups in nearly seven years.

The two pup were born to first-time parents Nairobi and Maputo on 7 January, but have just begun venturing out of their nest box to explore Taronga’s African-themed Meerkat exhibit this week.

They were initially a little wary of this big new world outside, but with a bit of encouragement from mum and dad they started to explore,” said Keeper, Courtney Mahony.

The pups’ sex will be confirmed later this month when they have their first vaccinations and a veterinary examination, although keepers suspect there is a male and a female.

They have started to do quick hands on health checks and are weighing the pups regularly to ensure they are healthy and comfortable in the presence of keepers. And apparently, it’s totally cool to hold Meerkats in your hand like they do in the pictures. 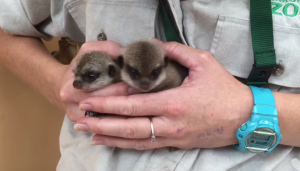 As with all Meerkat young, the yet-to-be named pups are developing very quickly. Despite only weighing a few grams when born, they both now tip the scales at over 120 grams and have begun to sample solid foods such as fly pupae and mealworms.

They are also practicing for sentry duty, trying to stand on their hind legs.

They may be young, but they’re already showing signs of their own little personalities. Our male is the bigger of the two and he’s more adventurous and inquisitive, while the female is quieter and prefers to stay close to mum,” said Mahony.

This is all new for them and the Meerkats learn by observing their mum and dad. New parents Nairobi and Maputo are proving to be fantastic and attentive first-time parents.

Nairobi is letting the pups suckle and grooming them at the right times and Maputo protects them, huddles over them and curls up with them at night. 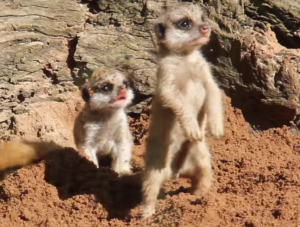 Maputo arrived from Perth Zoo in late 2014 to form a new breeding group with Taronga’s alpha female Nairobi, who was the last Meerkat born at the Zoo in January 2009.

Meerkats are native to southern Africa and can be found in the Kalahari Desert. They have adapted to living in very harsh conditions and climate, with little water, limited food and many predators. They have ears that can close in the event of a sandstorm and dark patches around their eyes lessen the desert glare like sunglasses.