Humans with the best intentions can actually sometimes do more harm to critters with their intervention.

In Connecticut, a young Virigina Oppossum was kept in someone’s home for a little over a month after being found abandoned.

Over four weeks, the person fed and kept the animal in their care. But had to take it in for help to a wildlife official who then rushed the oppossum to the Kensington Bird & Animal Hospital.

This person had good intentions but lacked the knowledge necessary to provide appropriate care, leading to a condition known as metabolic bone disease. MBD occurs when the animal does not obtain the proper nutrition causing the skeletal system to improperly form.

The better thing to do is to contact appropriate state licensed rehabbers when finding abandoned or injured wildlife.

The federal state department, the DEET, says as adorable as baby animals might be, they also require very specialized care and the appropriate diet.

Here is an example of an animal that had a severe case of nutritional Metabolic Bone Disease. Because it was being fed an inappropriate diet by an unlicensed individual for several weeks, this opossum had severe bone deformities that could not be corrected. Had it received the appropriate care, it would have been released into the wild.

Instead, the only option after discovering the bone disease was a humane euthanasia

PLEASE make every effort to consult with a wildlife rehabilitator, a state biologist, a local nature center, or a veterinarian if you find a wild orphaned baby. 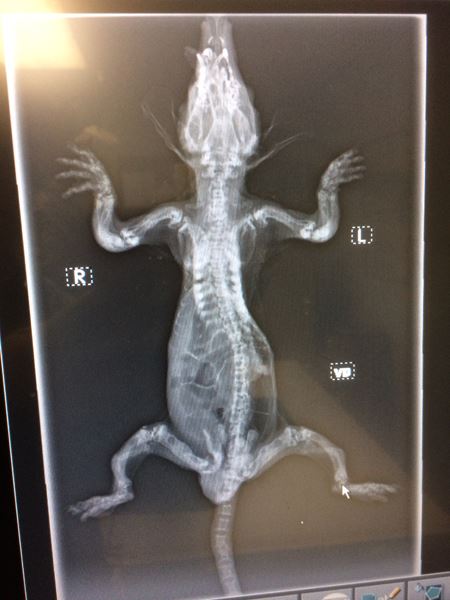