Why do you never see a baby squirrel?

It’s not just a joke. Turns out, it’s a legitimate, frequently asked question typed into Google.

The first hit that pops up is from the Peggy Notebaert Nature Museum in Chicago. 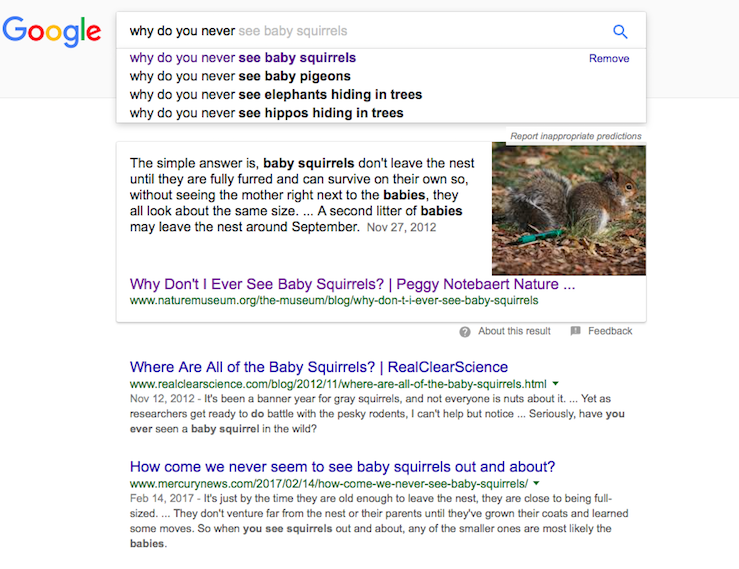 The museum explains the phenomenon.

“The simple answer is, baby squirrels don’t leave the nest until they are fully furred and can survive on their own so, without seeing the mother right next to the babies, they all look about the same size.”

When the first litter of babies do leave the nest in April or May, they are fluffy and fat, while their parents have lost their winter fat and are beginning to shed, so look relatively small. Then, a second litter of babies emerges in September when the parents are larding on the fat and winter fur, so it may be easier to identify babies born late in the year.

“Even with the specimens in-hand,” notes Steve Sullivan, the museum’s senior curator of urban ecology, “assessing age can be somewhat qualitative but when the babies are very young, they are simply more cute than the rest of the population.”

In sum: baby squirrels are super cute. Because. Science.

With that in mind, we present baby eastern grey squirrel.

The little gaffer is currently be cared for by the Hobbitstee Wildlife Refuge in Jarvis, Ontario where it was noshing on formula.

“Nom nom nom, that is yummy milk replacer,” the refuge said in an update.