A bald eagle rescued last September by a fisherman in Nanoose Bay after she was found floundering, barely alive and floating in the ocean died over the weekend.

Sometimes, no matter what we do for our patients, they are just not able to respond to treatment. She was treated for an ecoli infection, anemia, and ongoing emaciation. There were tears at O.W.L today, as we became very close to her.

“Nanoose” was found in the ocean by fisherman Don Dunbar. He brought her on to his boat and got her ashore where a helicopter pilot name Norman Snihur who happened to be nearby flew the malnourished bird to O.W.L.’s offices in Delta. 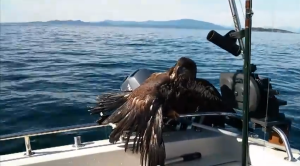 The juvenile bald eagle was extremely emaciated and waterlogged and weighed less than 3 kilograms when found. It was so skinny that initially, rescuers thought the eagle was a boy. Although there were fears, the eagle didn’t have any broken bones and while eager to eat quail and fish, “Nanoose” wasn’t able to keep any food down.

As Nanoose gained weight, rescuers realized she was actually a female because females are bigger than males.

O.W.L. suspected there was an obstruction (such as a fish hook) but after X-rays and blood tests done a few weeks later, it turned out the eagle had a digestive tract infection. Antibiotics was prescribed. 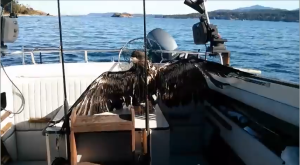 But despite all the efforts, Nanoose grew weaker in recent weeks.

A necropsy will be done to find out the cause of her death.