On a remote logging road in British Columbia, a bridge runs over a salmon run. 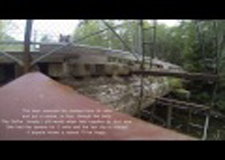 And sometimes on that bridge, bears meander across. From the bridge, they can spy the salmon, plan their day’s catch.

The bridge also provides, according to researcher John Kitchin, a convenient chin scratching post along its location near Knight Inlet

In a hilarious video posted on YouTube, Kitchin, an independent bear researcher in B.C., captured bears galore crossing the bridge. The bridge owner of the bridge built a platform for filming bear and that’s what Kitchin was doing with a Go Pro when a bear got up close. 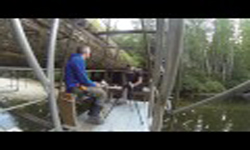 So close that the viewer can count the toes of the bear, so close that when the bear opens its jaw and shows off its teeth, it doesn’t take much imagination to imagine the bear’s breath.

The bear removed the camera from its case and sunk its teeth into the Go Pro.

Fortunately, Kitchin was able to duct tape the camera and save most of the footage.

She had the camera for two minutes and the rest of it is corrupted. If anyone knows a rescue, I’ll be happy