For those who love celebrity news and critter news, this story is an awesome intersection of both.

Bradley Cooper in a recent visit to the Ellen Show revealed he has an office near Clint Eastwood, his director in the movie American Sniper.

When Ellen asked whether Bradley had ever fed the squirrels as Clint does, that’s when Bradley got up to do his impression of how the big man feeds the squirrels that come right to his office.

And apparently it’s not a new thing for Clint Eastwood. He’s been known since his acting days as a squirrel feeder. This picture we found shows Clint in his western days with a squirrel fan. 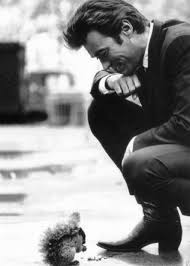 Ellen revealed in a show from a few years back that Clint, a neighbour on the lot where the Ellen Show is filmed, has tame squirrels who come by to his desk where he keeps a ready supply of nuts.

Clint and his squirrel buddy are yakking it up over a glass of wine.  And they even light a romantic candle.