A Canadian distillery has won the latest round in a bizarre legal brouhaha with a British Columbia city and a First Nation band over use of the “spirit bear” name.

The Federal Court of Canada ruled this month that Urban Distilleries of Kelowna, B.C. can carry on using the Spirit Bear brand in its line of gin and vodka products. The City of Terrace and the Kitasoo First Nation said they, along with the province,  had trademarked the name Spirit Bear long before Urban Distilleries came on the scene. But the court didn’t agree, much to the relief of Mike Urban, the company’s founder.

“He had named the brand as a tribute to the Spirit Bear, the official mammal of British Columbia, and as a symbol of the purity and local nature of the artisanal Spirit Bear gin and vodka products,” the company said in a statement.

The Spirit Bear, which is also known as the Kermode bear, is a white subspecies of the black bear found along the West coast of B.C.

Urban (below with a dog in the distillery) founded his company in 2010 and it has since produced some award-winning spirits, including the Spirit Bear lines.

“For the next three years I basically ate, slept and worked at the distillery,” he notes on the company’s website. 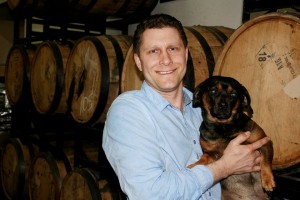 The trademark battle has been brewing since 2011 when the city and the band council first asked Urban to stop using the Spirit Bear handle. Urban said he “knew that the cost of rebranding could sink his fledging business, and believed he had a right to use the names freely.”

The court found the municipality and the aboriginal band council’s use of the the name spirit bear were improperly registered or used as a trademark. The court also told them to pay Urban’s costs.