The 29-year-old man from Valencia was killed after he was fatally gored by a heifer through the thorax and abdomen during the festival in the small village of Pedreguera.

The town suspended all bull-related festivities for the day.

At the famous San Fermin festival, first popularized by Ernest Hemingway in his novel The Sun Also Rises, participants fell, were stampeded and at least 30 people were injured.

A government statement said a 33-year-old Japanese man and a 24-year-old Spaniard were gored. The Navarra hospital confirmed the Japanese man had suffered a 15-centimeter (6-inch) thorax wound and was still under observation, while the local man was gored in his right arm. Both were considered to be in fair condition.

The regional government said a dozen others were also taken to city hospitals for trauma care, including a 37-year-old from Barcelona and another 33-year-old Japanese man. 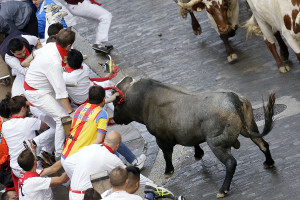 More than 1,000 people took part in the Pamplona run, which lasted just over four minutes, about 1 ½ times longer than usual.

Tourists from around the world, including Canadian, injured

One of the injured was a 46-year-old Canadian man who was listed in serious condition after he participated in the festival and was injured.

Ten people, including four Americans, were gored at the San Fermin festival last year. In all, 15 people have died from gorings at the festival since record-keeping began in 1924.

Every year, foreign tourists from all over the world go to San Fermin to pit themselves against the bulls. Animal rights groups have long protested the event with concerns the bulls are tortured beforehand to make them anxious and aggressive.

Spain still allows bullfights which typically conclude with the killing of the animal by a single sword thrust.

One of the more seriously injured men was not actually even taken part in the event, according to the San Fermin.com website. The observer was at the fence along with some other friends and they tried to find refuge there when the José Escolar bull charged into them and tossed the young runner into the middle of the course. 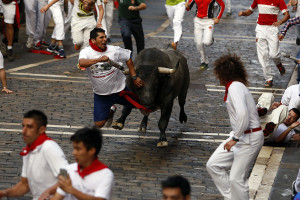 This runner was the one who was caught, but it could easily have been any one of the group gathered at that part of the fencing.  In fact, another young man lost one of his sneakers as a result of the violent charge made by the Escolar bull.

The injury could have been worse, officials say:

If the bull had really torn into the youth who lay totally at its mercy. However, luckily, the bull suddenly turned away and continued its run up the slope of this first stretch of the course.”

According to the first medical report issued by the Navarra hospital complex, the young man has suffered a goring to his arm and to his thorax and his condition is reserved.