The Calgary Stampede draws more than 1 million visitors over 10 days each July. It also attracts the annual howls from protesters complaining that rodeo sports, particularly chuck wagon racing, is cruel to animals. On the first night of the races, Samantha Baskerville and Marley Daviduk, volunteers with the Vancouver Animal Defense League, locked themselves to the rail and held up signs that read “blood sport” and “no more dead horses.” The move disrupted the Friday night races, saw officials bring out the black tarp usually reserved to shield rodeo-goers from the sight of a dead or dying animal, as the protesters were unlocked. But the show went on about an hour behind schedule. 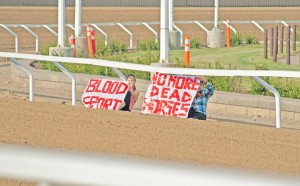 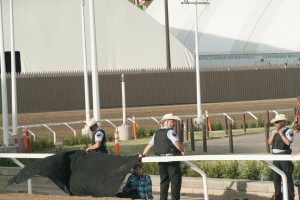 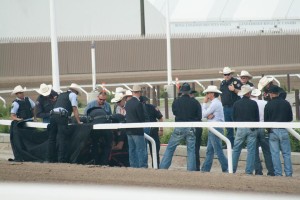 The Vancouver Humane Society has also long been opposed to the Stampede and rodeos in general calling them a “cruel spectacle of animal abuse.” The animal rights activists say about 60 horses have died in the last three decades at the Stampede, a number rodeo organizers have never denied. But Calgarians – ranging from Stampede officials, politicians and columnists to chuckwagon drivers, were quick to jump to the rodeo’s defence.

Note to protestors – #hellorhighwater didnt stop the @calgarystampede. Neither will you.

“We had a couple of trespassers who did not want the race to go on, and we had 16,000 people who did,” Bonni Clark of the Calgary Stampede told CTV.  And, champion driver Jason Glass told CTV the protests are misguided and misinformed: “We love our horses and they love their job.”

The protesters were carted away and charged with mischief. They remained defiant as they met with reporters the following day.

“I want to address the ubiquitous, ‘You don’t know what you’re talking about. You’re misinformed. You don’t understand the stampede, horses, chuckwagon, etc.’ criticism,” Marley Daviduk wrote on Facebook outlining her long history in horse sports. “I am a horse-person and not in a million years would I put my horse in a situation where statistically at least one horse was NOT walking away.”