Darcy Oake used dove tricks early on to wow judges on Britain’s Got Talent. That’s what attracted us to the magician in the first place. But as he upped the ante along the way to the final, it wasn’t enough to win the venerable talent show.

Oake, from Winnipeg, Man., finished fifth. Still, show officials were impressed with Oake’s escape act in the final, which included some kind of futuristic looking and terrifying animal trap, but no actual animals. You can watch it here:

“How did he do that?! Anyone else still mesmerised by Darcy’s performance?” the show noted on Facebook.

And, on its website as well as YouTube: “Danger, danger! Darcy Oake is seconds away from a messy exit to the Final. There’s no denying he’s hot – but is he hot enough.” 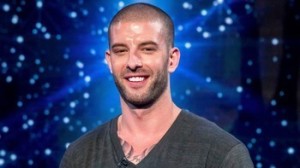 Nope. But we enjoyed watching the ride.