A cat shows up at the home of Bruce and Eileen Gough.

But this isn’t one of those heart-warming stories.

Instead of becoming one big happy family, the cat terrorized the two seniors for three days, refusing to leave.

The pensioners first noticed the cat as they were watching television.

Bruce Gough,74, left the cat alone at first thinking it would leave but after it didn’t budge, he tried to coax it out.

The cat appeared in the doorway and must have got in through a bedroom window.

When Gough, a retired aerospace engineer, tried to urge the cat to get out from under the bed, the cat flew at him, sank its teeth and claws into his forearm.

It was going berserk and flew around the room, knocking things over, including a Victorian ewer on the mantlepiece, which smashed.”

Unfortunately, the cat defecated and urinated in the room, which now stinks.

The couple shut the door and left the cat in there. Gough’s arm was bleeding quite badly and he had to go to the hospital to get a tetanus shot. 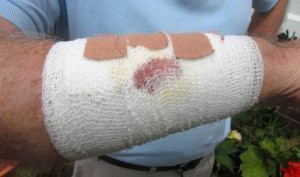 The cat then clawed its way up curtains and the following morning was still sitting on the edge of the sash window.

Calls to the RSPCA proved unfruitful. The RSPCA says their mandate is to help hurt animals or animals in distress.

Goughs had to turn to neighbour Andrew Fox, a retired firefighter and keen motorcyclist.

Fox donned full motorcycle leathers and helmet before approaching it on Saturday.

After a bit of a chase, the neighbour was finally able to grab the cat in a blanket and release dit back outside.