A wayward cat is lucky to be alive after winding up in the middle of a drag race in southern Alberta. And now, the Medicine Hat Drag Racing Association is buzzing about what happened after the video started making the rounds on social media. The 29 second video shows a souped up truck revving up to race. And, just as the truck takes off, a cat appears to fall from the undercarriage.

“Where did that kitty come from?” says the confused announcer.

The Medicine Hat Drag Racing Association posted the video this week to its Facebook page, but only after Street FX Motorsport & Graphics in Australia and its 1 million followers caught wind of the encounter.

“We get a lot of snakes and bunnies that want to come play on the track but a cat is a new one for us,” the Medicine Hat Drag Racing Association noted.

Rony Vandenberg was the man behind the wheel.

“That’s me racing,” he wrote on Facebook. “Cat must have somehow got in my trailer and hide underneath my truck. I had my truck running for a while in the pits and went through tech and it never jumped out until I launched.”

“I didn’t drive over the cat. It fell off my truck, was hiding underneath,” he added.

Other patrons of the popular track said they found a litter of kittens by the concession stand and figured the cat on the track must be the mother.

Brody Turton was the guy in the video who walked onto the track to check on the cat. 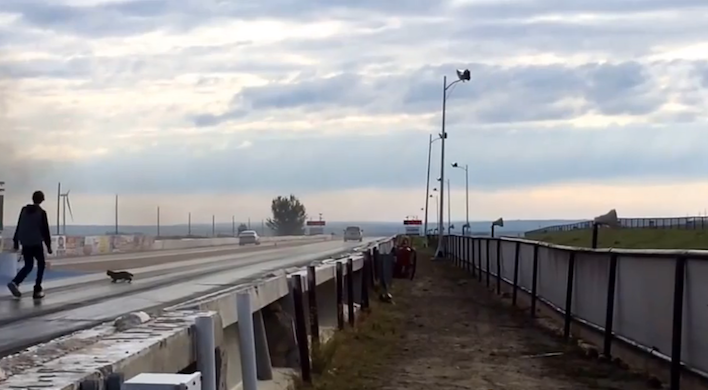 “The cat was 100% okay, just scared,” he wrote on Facebook. “I took it off the track over behind the tower and we found it the next weekend with 6 baby kittens!”

No word on the status of the feline family.