You’ve seen Bambi on ice? Well, here’s the rescue of a deer stuck in ice.

Former firefighter Matthew Todd Paproski jumped into action to save the doomed deer after someone posted on Facebook about the animal lodged helplessly in a river near Drumheller, Alberta.

The rescue actually occurred on Dec. 10, but Paproski’s company, Starland Studios, a local film company, only posted the video online on Dec. 27. It has since been watched more than 22,000 times.

Waist-deep in an icy river, Paproski wraps a rope around the exhausted and frightened doe.

And, while someone on shores pulls, Paproski lifts, saving the deer. 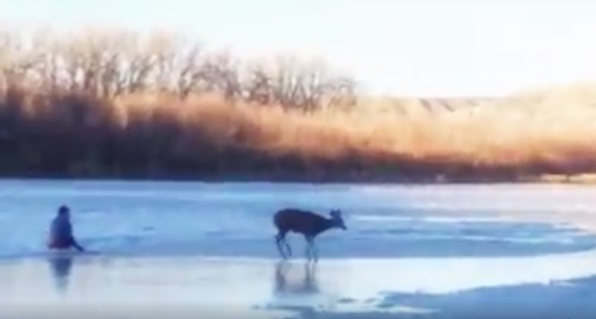 Paproski is being called a hero, but he calls it a true “team effort” and hopes it inspires others.

“We posted it in the name of encouraging others to help animals in distress,” he wrote on Facebook. But maybe leave the icy river rescues, at least, to the pros.

Be sure to watch until the end for the real-life Bambi on ice moment.