The RSPCA in Canberra put out an urgent call earlier this week for an expert shearer after finding Chris the sheep who, as you can tell from the picture, was a bit overgrown.

RSPCA ACT is urgently seeking the help of a shearer to hopefully save this sheep we just rescued! If you can help, please call us immediately at 6287 8102!

Chris the Sheep” was rescued by RSPCA ACT on Sept 2 after a member of the public informed our inspectors about his wooly plight.

It took us a few days to find him, and five staff members (plus the finder) to get him back to the shelter. It was obvious that he had been away from his herd and human contact for at least five years as his merino wool had grown to an incredible mass. Furthermore, as a solitary sheep, he was incredibly stressed from the new human contact.

As the RSPCA explained, Chris was so wooly that he could barely walk or fit through their paddock doors.

We needed to shear him as soon as possible. However, we were also unsure if he could live through this ordeal as he was clearly stressed and could die easily of shock.

Under the guidance of RSPCA ACT veterinarians and the help of a shearer, 40.45 kilograms of wool was taken from the sheep the following morning which was a new unofficial world record. 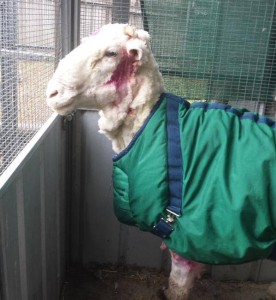 “There could be infections, flystrike, [the coat] could prevent him from going to the bathroom. There could be a really nasty thing under that coat but we won’t know that until we get there,” RSPCA ACT boss Tammy Ven Dange​ said.

Chris was sedated to give him a better chance of surviving the shearing. Australian Shearers Hall-of-Famer Ian Elkins answered the call for help.

In response to comments that shearing the sheep amounted to animal cruelty, Ms Ven Dange said that was only true if done incorrectly.

“If it’s not sheared, it’s actually cruel,” she said, adding that merinos had been bred for the specific purpose of growing wool.

But, she said, the sheep had not necessarily been neglected by its owner.

“It happens a lot apparently, when they’re trying to herd you can have a bunch of sheep and one gets lost.
“Certainly, the poor guy has been on his own for while.”

Early guesses have put the fleece at several years’ growth.