Apparently the worldwide outrage over the death of Cecil the lion has had no impact on the sport hunting community.

A German hunter has paid about $60,000 to take down a so-called 100-pounder-tusker in Zimbabwe. The elephant, which is estimated to have been between 40- and 60-year-old, had massive tusks, each weighing about 120lbs.

According to the Telegraph it was shot Oct. 8. by the German national using a local guide on a private hunting concession outside Gonarezhou National Park. It was called the largest elephant killed in Africa in three decades.

“The biggest elephant bagged in more than 30 years is very tangible proof of the huge conservation benefits of managed trophy hunting. There is actually a lot to celebrate here! If the money gained from hunting hadn’t encouraged protection of Zimbabwes elephants a magnificent bull like this would never emerge outside the few and relatively small national parks…..

Try finding an elephant bull like this outside a nationalpark in Kenya….. it’s not going to happen – the poachers got them a long time ago, because nobody in Kenya cares – simply because the elephants have no value to the local communities!” 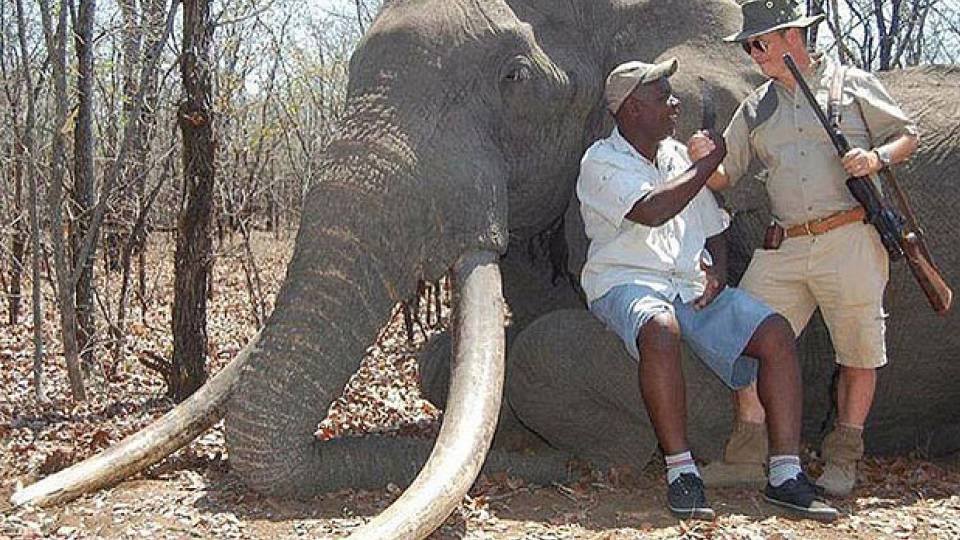 Of course, not everyone agrees.

“We suspect this elephant may have come from Kruger Park. His tusks were so big that they dragged along the ground when he was walking. The most disapponting thing is that when a local Zimbabwean kills an animal for food for his family, he is sentenced to between 5 and 15 years in prison but when a wealthy foreign hunter comes in and shoots an animal, he gets away with it. What message are we giving the people?”

“Hunters and hunting companies are often shockingly ignorant about elephant biology, or choose to be so to defend their despicable behavior. They like to tell you that they are killing the “dead wood” or the “reproductively senile” individuals in an elephant population. ‪#‎ElephantVoices‬ Joyce Poole spent decades studying older male elephants and documented that longevity is critical to their reproductive success. The beautiful elephant the hunter recently shot in ‪#‎Zimbabwe‬ is a male in his prime. He would have been one of Zimbabwe’s most important breeding males, if it wasn’t for the “brave” hunter from Germany who wanted his tusks or his head on his wall. Never mind the fact that this magnificent elephant had an interest in going on living and had friends whom he cared for and who cared about him.
From ElephantVoices perspective trophy hunting of elephants is unacceptable, both from an ethical point of view and due to the signals it gives to local people. Tourism is always a better alternative, with long term profits to many rather that a big one-off split between a few pockets. The hunting industry continues to give a different story, but the statistics are clear. As an average just a tiny percentage goes back to local communities, and little work is being created.
The faces of the hunters in the linked article give us the chills. Why be proud about having killed a gentle, long-lived, intelligent, social animal as big as a bus? Please try hard to keep a decent language if you want to contribute views on the controversial issue of hunting – we tried hard ourselves.”

“In the shadow of Cecil the lion, we are saddened to report a majestic bull elephant that was estimated to be between 40 & 60 years old, and was arguably the largest elephant seen in Zimbabwe for the past 30 years, was killed by a German trophy hunter who paid $60,000 for the “privilege” of hunting an elephant. We need to start protecting our wildlife and stop the archaic, barbaric “sport” of trophy hunting!”

Nearly 25,000 people have signed a petition to stop trophy hunting.

And one thing is abundantly clear. Poachers are beating conservationists. Almost everywhere in Africa is experiencing a decline in elephants, not an increase.

“The rate at which elephants are being killed in Zimbabwe is truly disturbing,” Rodrigues noted. “Last week, 14 were killed – 3 in Matusadona and 11 in Hwange National Park. 16 were found dead in Lupande and 10 in Chakabvi in Nyamatela. Many of these elephants have been poisoned with cyanide. 14 tusks have been recovered but the other tusks were taken by the poachers. The problem with the cyanide poisoning is that other animals are dying as well. 2 vultures were found poisoned after eating the carcass of one of the elephants and an eland was found snared. A packet containing 1 kilogram of cyanide was also found by the authorities. 36 carcasses were found near Sinamatella in Hwange National Park in the Dzivanini area. This totals 76 elephants killed in the past 2 weeks.”

Still, the man who helped arrange the hunt defended his client in an interview with the Telegraph.

“This was a legal hunt and the client did nothing wrong,” he said. “We hunters have thick skins and we know what the greenies will say. This elephant was probably 60 years old and had spread its seed many many times over.”

Anthony Kaschula, who operates a photographic safari firm in Gonarezhou, posted pictures of the hunt on Facebook.

“We have no control over poaching but we do have control over hunting policy that should acknowledge that animals such as this one are of far more value alive (to both hunters and non-hunters) than dead,” he wrote. “Individual elephants such as these should be accorded their true value as a National Heritage and should be off limits to hunting. In this case, we have collectively failed to ensure that legislation is not in place to help safeguard such magnificent animals.”