They are all dead critters thrown, tossed and unceremoniously chucked onto the ice during NHL games.

Only different now: A Tennessee man who flung a catfish onto the rink during Game 1 of the Stanley Cup Final between the Nashville Predators and the Pittsburgh Penguins is now facing charges.

Probably the coolest thing my dad and uncle have ever been a part of. 😂 #CatfishGuy #officialvideo pic.twitter.com/Pxx9MO6Aks

And so, #CatfishGuy officially became a thing.

Jacob Waddell is the self-proclaimed #CatfishGuy.

And, now the 36-year-old is facing charges of disorderly conduct (flinging a dead fish), disrupting a meeting (the good old hockey game), and possession of an instrument of a crime (namely, a catfish).

He was also ejected from the game.

“At approximately 9:30 p.m. on Monday, May 29 during the Penguins vs. Predators hockey game at PPG Paints Arena, a male patron threw a dead catfish over the glass surrounding the rink and onto the ice,” Pittsburgh Police announced. “The male was identified as Jacob Waddell, 36, of Nolensville, Tennessee. Waddell was immediately escorted from the Arena without incident. Waddell is being charged via summons with disorderly conduct, possessing instruments of crime, and disrupting meetings and processions.”

A Tennessee man is facing charges after throwing a dead catfish onto the ice during the @penguins/@PredsNHL game: https://t.co/RRFzLuMgta

All if it is a lot more than police in other hockey cities — Detroit and Nashville — have done when fans have thrown dead animals during games.

According to police, Waddell bought the catfish in Tennessee, vacuum sealed it, snuck it in via his compression shorts, then removed in the men’s bathroom and hid it in a t-shirt before waltzing down near the ice.

Charge they may, charge they might, that Catfish still hit the ice last night!!!! Go Preds!!!

And i gotta give credit where credit is due, @kimbkimandme helped me find a fresh Nashville catfish. #smashville

He even called himself a “dumb redneck with a bad idea,” according to the Pittsburgh Post-Gazette.

“Like an ignorant redneck, I thought ‘Wouldn’t it be awesome to throw a catfish on the ice at this game?’”

Many marvelled – and laughed – at the man’s ingenuity, even pleading for leniency.

The misdemeanours could net a 6-year sentence and more than $12,000 in fines.

But PETA was mostly impressed with the quick action taken by the Penguins and police.

“Whether catfish or cat, it is never acceptable to toss any sensitive, intelligent animal’s body onto the ice during a hockey game,” the animal rights organization said. “PETA applauds the arena for taking swift action that will remind all sports fans that this offensive behavior won’t be tolerated. We hope that all NHL arenas will follow suit!” 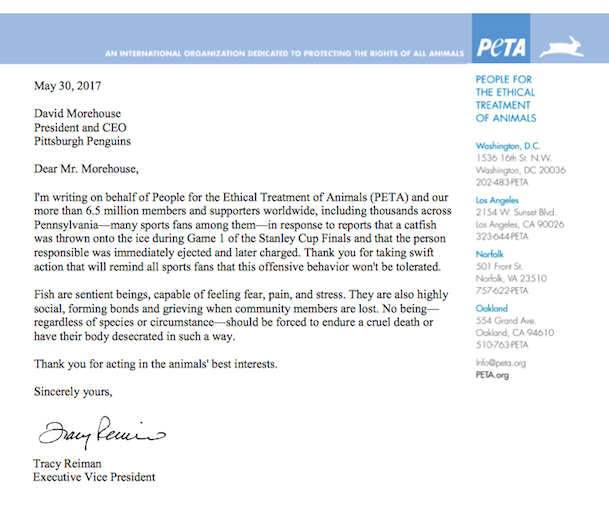 The plea will likely hold little water in Nashville.

Chucking catfish has been commonplace since 2003, with as far as anyone can tell, no charges.