Danny is doing okay, the RCMP in New Brunswick say, after receiving a high number of requests from the media and the public and in person wondering about Cst. Dave Ross’ police service dog.

Danny, a German Shepherd and trained police dog, left a heartbroken nation grieving even more deeply when he cried and whimpered at the casket beside his trainer. 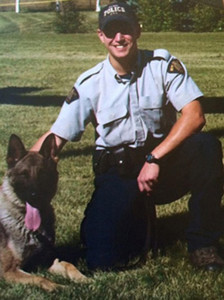 Cst. Ross and two fellow officers Cst. Douglas James Larche and Cst. Fabrice Georges Gevaudan were gunned down in Moncton last week after a gunman went on a rampage. The suspect has since been caught.

At the regimental funeral for the three officers thousands of people, and one dog, Danny, cried when the caskets were brought in to Moncton Coliseum.

Moncton RCMP wanted to assure concerned people that Danny is doing ok after the ceremony when his heartbroken cries at Ross’ casket broke so many hearts.

The police released a statement to tell the public more about the relationship between Cst. Ross and Danny.

Dave began working with Danny on December 4, 2012. The two began formal training on April 22, 2013, and graduated from the Police Dog Service Training Centre on August 30, 2013, giving Danny less than a year of service when he tragically lost his partner.

Anytime Danny barked at home, it would be to get Dave to open the truck door so they could go to work. It wouldn’t be fair to Danny to retire him as he loved his work as much as Dave did.”

While Danny too is grieving for his handler, he will have the opportunity to continue on to a rewarding career.

While it is unusual for a police service dog to change handlers, it has happened a few times when a handler left the program, or retired.

When a handler in need of a police service dog is identified, the process to re-team Danny will begin.

Danny will go through a bonding period with his new handler, after which he will return to Innisfail for a three-week period to confirm the new team meets the standards established by the RCMP.

Danny is trained to work.

Danny’s bond with Dave will always be there. If not for Dave recognizing Danny’s skills, he would never have had the opportunity to serve Canadians, something he will continue to do with pride and dedication, said the RCMP.