Crusoe is a daschshund, a miniature black and tan doggie who is convinced he’s a celebrity. He also thinks he’s a hockey player.

Along with his brother Oakley, the two critters shoots, blocks, shoots and scores again in an impressive game of hockey wearing the jerseys of two Canadian NHL teams. 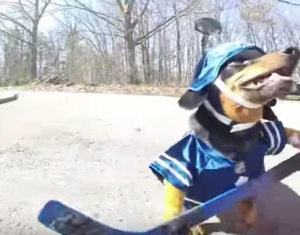 I was named after Robinson Crusoe for my deep sense of adventure and my natural ability to instil fascination in the public eye. My tagline is “the wiener dog who thinks he’s more of a celebrity than he really is”, but I think at this point I pretty much am a celebrity!

Oakley and Crusoe were repping their hometown teams of Montreal Canadiens and Toronto Maple Leafs.

The costumes, according to the dogs’ owner, are teddy bear outfits modified to have arms and with ministicks attached. 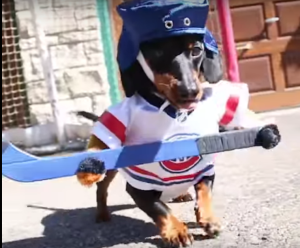