Men’s underwear, instant coffee sachets, parts of plastic bags and plastic rope were found inside the stomach of a wild deer that died in a national park in Thailand.

Officials said the deer had been ingesting plastic for a long time before it died with 7 kg (15 pounds) of garbage in its stomach. 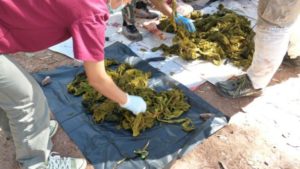 Earlier this year, an orphaned dugong, a marine mammal, died after it was found that plastic had obstructed her passageways. The dugong, named Mariam, won hearts in Thailand after photos taken of her rescue went viral.

The 10-year-old male deer living in Khun Sathan National Park in the northern district of Na Noi was found Nov 25th. In its belly were also rubber gloves and instant noodles.

On Facebook, anger was directed at park-goers who littered.

When you go into a national park, take your rubbish back. Have some responsibility,” one comment on Facebook said.

National parks officials say they will set up a committee to look at educating the public and reducing waste.

The country’s environment minister had in September said that major retailers in Thailand would stop providing single-use plastic bags from January 2020. Plastic bags are frequently used in the major cities in the country to package street food and drinks.