Creed pleaded guilty to the charges during a court appearance April 10. She was hit with a record-setting fine of $10,000 and handed a lifetime limit of only two animals.

“This is the largest fine ever handed down in Calgary for an Animal Cruelty case,” Brad Nichols, manager, cruelty investigations with Calgary Humane Society. “This reflects both the number of animals involved and the severity of the environmental and medical neglect.”

The limit on the number of animals she can own is designed to end any breeding, pet sitting or mass handling or showing, he added.

Nichols called it a “considerable penalty” in light of Creed’s “lengthy involvement in the dog show community.” 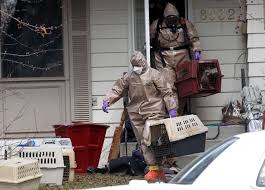 The 51 charges under the Animal Protection Act of Alberta came after officials were called to the home in May, 2014. The offences are related to causing or permitting an animal to be in distress. Seventeen dogs were left in need of serious veterinary care.

“Hopefully this sentence acts as a deterrent for those warehousing animals for any purpose,” Nichols said. “This case demonstrates how severely quality of care can drop off with a large population of animals.”