An estimated one quarter of the four million residents in Bosnia-Hercegovina are without access to clean water right now because of major flooding in the country.

More than 35 people have died in Serbia and Bosnia but many more victims are expected to emerge as the waters recede.

Heroic acts are being performed across the Balkans as residents help each other cope with what has been called one of the country’s worst natural disasters.

Buses of school children from Sarajevo arrived in the northern town of Maglaj to help with the clean up to avoid even more infections and diseases that will come from unsanitary conditions caused by rising and receding flood waters.

If anyone knows the story about this picture we found on Twitter of a dog with a cat on its back, let us know. 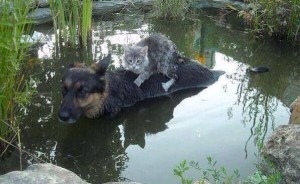 We do know what happened in a dramatic rescue from the Zenica River when a group of strangers came together to help a dog rise from the rubbish.

About four to five men jump into action when they see the dog struggling to emerge from the river. But the wall is too hard for the dog to climb up and the anxious animal keeps falling back in. 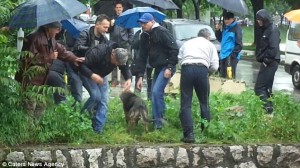 Attempts by the men to pull the dog out aren’t working as the panicked dog can’t get a grip.

Finally, as two men reach for the dog while other men hold on to them to keep the humans from falling in, the dog is pulled to safety.