Whale Research Cook Islands posted this incredible video of a vessel moving through a pod of dolphins.

A megapod of epic proportions, really. Those lucky enough to be on the boat, hoot and holler with glee. It’s also a way to vocalize with the dolphins, though some people worried about all the noise and the boat travelling with the pod. 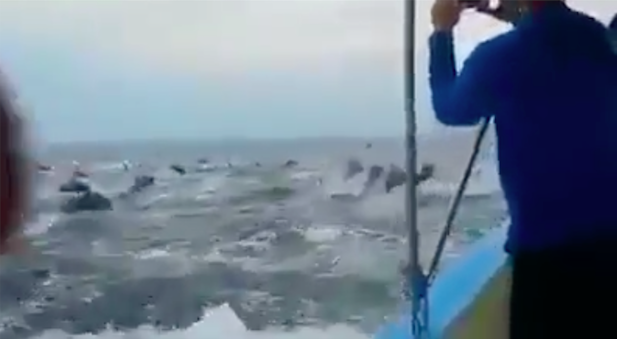 Shawn Larkin has captured moments like this before. He posted this video on a trip he guided trip in 2014, offshore Osa, Pacific Costa Rica with Costa Cetacea.

“When a dolphin megapod wants to travel together at speed they use a dance called cascade because they flow together like a dolphin waterfall,” he wrote in 2014 YouTube posting.

And, here’s another megapod off San Diego, which dates back to 2013. Dolphriends estimates as many as 100,000 were swimming together.