UPDATE: Eeyore the donkey has been found, according to local media. The Edmonton Journal reported that the SPCA contacted the owners Friday evening, but no reunion has taken place as both animal welfare officials and RCMP continue to investigate.

More than a week after a pet donkey vanished from a farm in Leduc County, Alta., Mounties are now on the case.

RCMP issued a press release, sent notices to livestock officials and are monitoring social media channels for the missing animal. Police said that on May 12, around 1 p.m., a witness reported two females in an older model Jeep Cherokee “with a donkey belonging to a local farmer.”  The donkey was later loaded into an unknown truck and trailer and whisked away, according to police.

“This was a family pet and the owner is quite upset about the theft,” RCMP Constable Drew Burchett of the Leduc Integrated Traffic Services Unit, said in a statement issued Tuesday night. 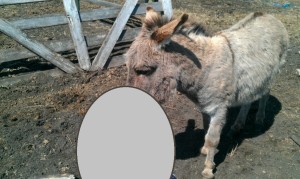