This driver had an unexpected border jumper aboard for the car ride from Mexico to southern California.

That’s when the Oceanside Fire Department was summoned to haul away the stowaway back on March 21.

“Oceanside Firefighters were called to rescue a cat that was trapped in the front fender of a vehicle,” firefighters wrote on their Facebook page this week. “The reporting party states that he drove from Mexico, arrived home in Oceanside, and then heard meowing. The cat was rescued and delivered to the Humane Society. Good job Station 8 personnel.” 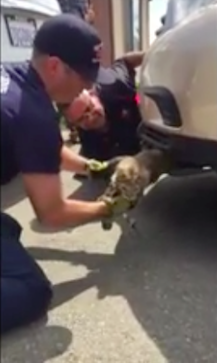 The cat travelled about 54 miles and was quite vocal as a gloved firefighter freed the cat from the fender.

Here’s the video of the unusual rescue.