The concept is enticing.

Send a drone up over a streak of Siberian tigers. See what happens. Predictably, they lay chase and knock down the wayward gadget.

The title on the video showcasing the results — “Chubby Siberian Tigers Hunt Electronic Bird of Prey” — is similarly appealing.

“Video footage of a habitat for these rare felines in northeast China’s Heilongjiang Province shows them meandering about until they catch sight of a drone with a camera buzzing around,” notes China Central Television, which posted the video. “The rather chubby tigers played cat and mouse with the drone until a 2 or 3-year-old tiger swiped at the camera, a large paw filling its screen before losing signal.”

“This drone chasing is becoming more popular among these well-nourished tigers in the habitat,” the TV station says.

In the eyes of 🐯 🐯🐯: A drone is knocked out of the sky after being chased by a group of tigers in China pic.twitter.com/fiEghQKwR4

Media outlets around the world and observers, however, are now throwing cold water on the fun-filled video.

The Washington Post for example had the bubble-bursting headline “A disturbing reality behind that Chinese tiger drone video making the Internet rounds.”

American environmental journalist John Platt was quick to note: ” This must have been at one of China’s tiger farms. The tigers killed the drone, but the tigers themselves are still destined for slaughter.”

It was later identified as China’s Harbin Siberian Tiger Park in Heilongjiang province, which has been linked to the tiger bone and wine trade. It has an unenviable backstory.

Reminder: China has an estimated *7* wild tigers left. Many more in this video = obviously a tiger farm. They’ll be turned into bone & wine https://t.co/7hxmkSDei2

Big Cat Rescue has reported that the facility operates as if it’s a rescue and rehabilitation organization, but really it’s a place that draw tourists by the busload and McClatchy investigators previously reported deplorable conditions.

“These facilities breed tigers for tourist entertainment while they’re alive, and their parts are reportedly used for luxury and medicinal products,” he told ABC.  “Among the welfare issues with the footage is that tigers are solitary animals, so it is unnatural for so many to live together.”

Breeding of captive tigers for trade in their parts, of course, has long been banned.

There are an estimated 5,000 tigers in captive farms in China, according to the Washington Post. In the Chinese wilderness, there perhaps just two dozen Siberian tigers. That from China’s State Forestry Administration estimates in 2013.

And so, this isn’t so cute after all. 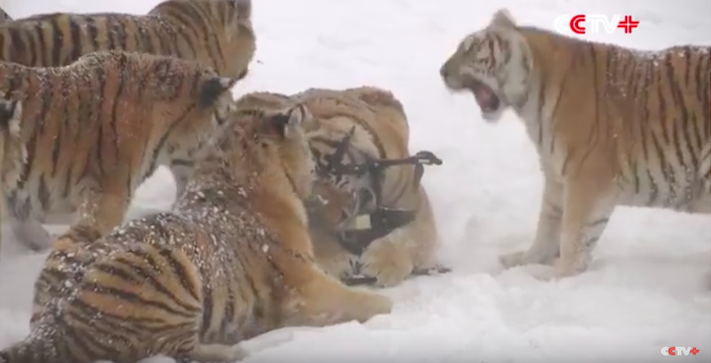