Earlier this month, we told you that singer Ed Sheeran had gotten a latest tattoo. A lion. Across his entire chest

At first, we thought Sheeran’s new ink was in honour of the now world-famous poached lion, Cecil.

But in fact, the pop star’s new tattoo, which takes up his entire chest, is a just an ordinary lion to celebrate his three sold-out shows at Wembley Stadium last month. This lion, he told BBC, is in honour of England’s football team. A lion, of course, is the logo.

And, the work, shared today on Twitter and Instagram, is receiving mixed reviews from fans and music critics ranging from “OMFG I love it!” to “What is going on in the world” and “There’s a point when you need to stop…now would be good a very good time.”

We’ll let you be the judge.

Lion is courtesy of @kp_est78, who puts up with me complaining about the pain

Kevin Paul is a celebrity tattoo artist who also happens to put tattoos on a lot of celebrities.

Glad everybodys loving the new work I have been doing the last couple of days .cant wait till you see it finished it’s going to be amazing — Kevin Paul Tattoo (@kp_est78) August 11, 2015

For real. One more time. 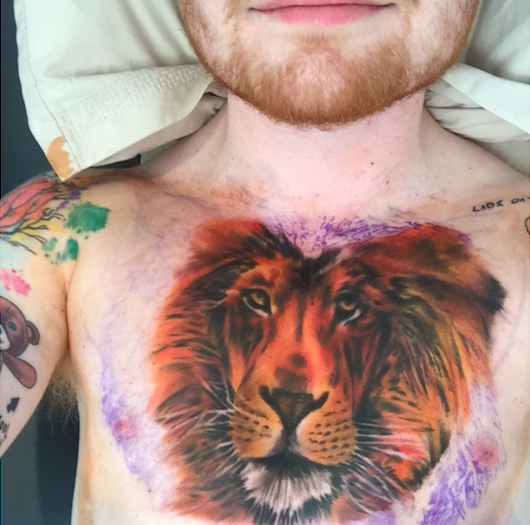 UPDATE: Well now we learn, as it turns out that the lion was a fake. Sheeran posted a picture on Instagram today showing his pale, freckly un-lioned chest.

Was only joking about the lion

Where did the lion go?

Turns out Sheeran was only joking.