For 45 years, Satao the elephant has roamed Tsavo East National Park in Kenya. The elephant was renowned for his overly long tusks which were so long they touched the ground.

Think about it. An elephant is a pretty tall critter. For his tusks to be that long, Satao had to have lived a long life. 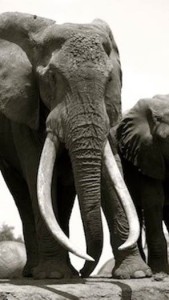 But now that long life has come to a cruel end. Poachers using a single poisoned arrow has taken down an elephant much-loved by visitors to the national park.

The elephant was killed May 30th. The arrow entered his left flank and he stood no chance of survival.
The park spotted his carcass a couple of days later but to avoid any potential false alarms, authorities had to verify the carcass was really Satao.
For the last 18 months, KWS and Tsavo Trust jointly monitored Satao’s movements using aerial reconnaissance, and KWS deployed ground personnel in his known home range.
But with today’s mounting poaching pressures and anti-poaching resources stretched to the limit, it proved impossible to prevent the poachers getting through the net.Immediately reports of a fresh carcass in this area of Tsavo were received by KWS, a Tsavo Trust reconnaissance flight took off with a KWS officer on board.

It did not take long to locate the carcass near the boundary of the National Park. A joint KWS / Tsavo Trust ground team followed up immediately. Despite the mutilated head, they deduced that the carcass was most probably that of Satao for the following reasons:

Satao was well known by the KWS / Tsavo Trust units operating continuously in this area. When he was alive, his enormous tusks were easily identifiable, even from the air. Although the poachers had hacked off his face and taken his ivory, there were other physical attributes and circumstantial evidence that pointed to this carcass being that of Satao. 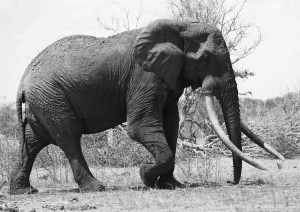 Satao was very much a creature of habit. He roamed a very specific area, known to KWS and Tsavo Trust, most often in the company of small groups of bull elephant.
With the recent rain in the area, over 1,000 elephants have moved into the area to take advantage of the green and plentiful vegetation.
Satao had not moved from this area for the last two months.Satao was last seen alive by Tsavo Trust on 19th May 2014, just 300 meters from where his carcass now lies.
He was with four other bulls that he was frequently seen with.
During May 2014, Tsavo Trust had observed him no fewer than 9 times from the air and several times from the ground.
Protection efforts were stepped up when he ventured right up to the boundary of the Park (an area that is a historical and present poaching hotspot, especially for poachers using poisoned arrows).Satao had “clean ears” – there were no cuts, tears or obvious scars, making him easily identifiable when he was alive and now that he is dead.
The mud caked on his mutilated forehead and back was similar to that seen on him when he was alive.
h/t: Tsavo Trust