This is amazing. Possibly stupid, but mostly amazing. And, for now, we’re totally buying this story. Two guys in Saskatchewan swam through flood waters to save some stranded foxes. Their friend, Derek Kroeher, documented Sunday’s event on Twitter.

@JC_Garden My friends swimming for stranded foxes after 8 inches of rain near Welwyn! #neature pic.twitter.com/LTcnRYcUhD

An entire spring’s worth of rain fell in in just a couple of days in southern Saskatchewan and Manitoba prompting widespread states of emergency, according to the Regina Leader-Post and the Winnipeg Free Press.

@The_Miss_Greer only took about two minutes for them to swim both ways, they saved two of them! (only found two) — Derek Roeher (@derekroeher) June 30, 2014

@Gbuschrist the one jumped in the water away from the guys then realized it was too drained and had no better option! — Derek Roeher (@derekroeher) June 30, 2014

Behold a (nearly) drowned fox. And, a whole lot of Twitter love for these guys. 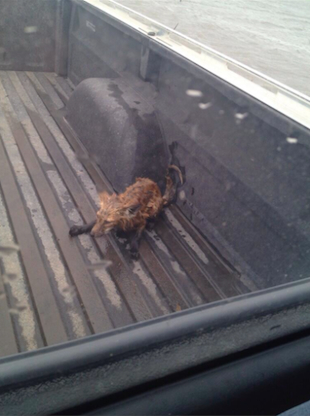