It’s taken a while for orphaned elephant Dok Geaw to feel comfortable around other elephants.

Dok Geaw was orphaned at the age of four months when his mother was killed. He was taken to the Thai Elephant Nature Park in Chiang Mai, Thailand when he was a year and nine months old. 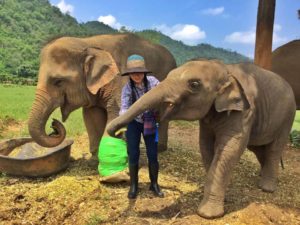 During the week after arriving at ENP, many nannies have come to introduce and nominate themselves to Dok Geaw. Every group is interested to adopt the boy , but it seems Dok Geaw has not made a decision to accept anyone yet.

The boy seemed taken with Dani and Khun Dej. Dani, another rescue, had a boy elephant but she was denied raising her baby when the owners sold him off to a circus camp.

Dani was rescued in 2010 and since that time she remained mostly solitary, and would stay always on the edge of deeper friendships. 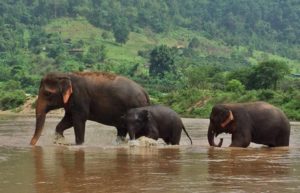 When KhunDej arrived in 2014, she readily took on the roll of his surrogate mother. It seems now that she would have an additional son to care for. Dok Geaw is definitely confident to stay around her.