There’s a Calgary, Canada connection to the latest cast member of Games of Thrones.

A major character in the critter-filled world of GofT is Ghost, the direwolf of Jon Snow.

Quigley, a four-legged actor with Instinct, a training studio for dogs in Calgary, will be featured in a few scenes on Games of Thrones as the big wolf in Westeros.

Quigley is owned by Andrew Simpson who trains animals that have appeared in feature films around the world. 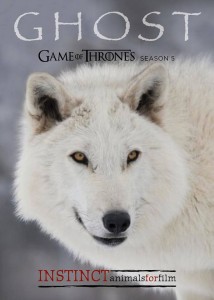 Simpson’s dogs have appeared in movies including Elf and Final Destination but this appearance by Quigley may be the one that’s seen by more people than any other film.

Quigley has already appeared in season five premiere from a few weeks ago here in North America, but there are scenes in the soon-to-air seventh episode where he really struts his stuff, Simpson said in an interview with Metro News in Calgary.

“In the first one (episode), he was in a courtyard with Jon Snow.. In the seventh one, he was doing a lot of snarling and attack stuff.

Simpson said the show’s creators have actually been reaching out to him to be involved since the show began, but he spent the last three years shooting a massive project in China called Wolf Totem.

At one point, when the direwolves were a bigger part of the plot, Game of Thrones’ producers attempted to bring him and his pack to Ireland. But they decided to shoot some of the scenes instead in Calgary in a secret location.