Every year as many as 35,000 elephants are killed for their ivory. It’s a disgusting trade and poachers have thrived for generations on the global ivory trade.

Put that into perspective and  here’s how the numbers break down. Every 15 minutes, an elephant is killed. In one day, 96 elephants are slaughtered.

The demand for ivory makes no sense and non profits and government organizations have been trying to stop the demand.

Hundreds of ivory carved statues were put on display and then on a conveyer belt where the items were ground into dust. 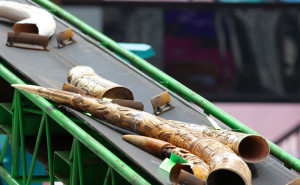 Sally Jewell, the secretary of the U.S. Department of the Interior said:

“Today’s ivory crush will serve as a stark reminder to the rest of the world that the United States will not tolerate wildlife crimes.”

Most of the ivory came from an antiques dealer in Philadelphia name Victor Gordon who prosecutors believe was a major figure in transactions involving ivory smuggling from Africa.

Gordon pleaded guilty in 2012 to violating the African Elephant Conservation Act in a case that grew out of a broader investigation by the U.S. Fish and Wildlife Service into African-born ivory smugglers active in the U.S. Gordon was sentenced to 30 months in jail.

Poaching in West and central Africa is particularly widespread and violent, involving the killing of both park rangers and poachers.

Sixty-five percent of the region’s forest elephants have been slaughtered in the past decade.