It has been an historic day at the Toronto Zoo where Er Shun, a giant panda on loan from China, has successfully given birth to twins. The baby news was shared Tuesday on social media and for panda watchers, it was riveting to follow.

On 10/13 at 3:31AM, Er Shun gave birth to the first of two panda cubs. The second cub was born at 3:44AM #TOpandacubs pic.twitter.com/qJSDLoUCXM

“Er Shun is demonstrating excellent maternal instincts and began cleaning and cradling the first cub soon after its birth,” the zoo said in a statement.

“While this is wonderful news, the tiny cubs are very vulnerable at this size, so the next several hours and days will be critical to their survival,” the zoo said.

This is the first birth of giant pandas in Canada and we will continue to provide you with updates on these exciting births #TOpandacubs — The Toronto Zoo (@TheTorontoZoo) October 13, 2015

The zoo even posted a video of the birth, which is a pretty remarkable thing to see. 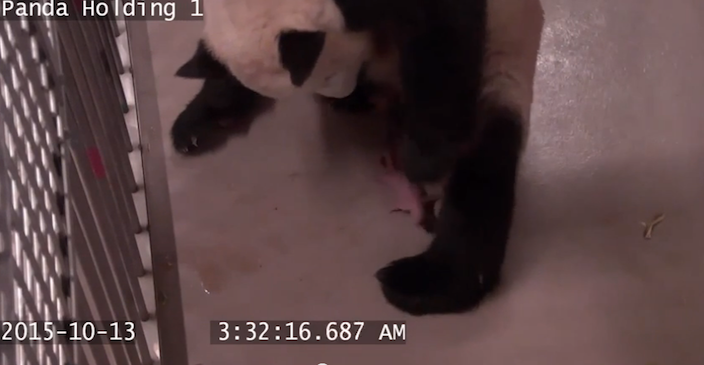 While giant panda twins birth are common, the mother will only nurse one cub instinctively. Officials at the zoo will make sure the cubs will be given an equal chance to bond with their mother and nurse. But staff will also “twin swap,” which means each will spend a block of time with mom so so will care for both as they develop. As soon as the second cub was born, officials placed it in an incubator and two hours later, given back to Er Shun to help kickstart the bonding process.

It could still take several months for the genders of the cubs and parentage to be confirmed. Er Shun was artificially inseminated earlier this year.  And, giant pandas aren’t generally named until they are 100 days old.

“We are so proud to be contributing to the ongoing survival of this endangered species. The Toronto Zoo has been a leader through its unique and successful reproductive programs and these historical births are a testament to the commitment and passion of the professional staff who work tirelessly every day to ensure the ongoing survival of so many species,” John Tracogna, the zoo’s chief executive officer, said in a statement.

Er Shun and a male panda, Da Mao, are on loan to the zoo until 2018. Then they, and if all goes well, along with the twins, would move to the Calgary Zoo for a five-year term. While it is still touch-and-go for the twins, congratulations poured in from around the world. And, it was also pretty adorable to see.