It was started by two guys who enjoyed watching sheep while on a train ride through the Netherlands.

Ding Ren and Mike Karabinos said they started their Tumblr feed to dedicate it to a “a particular sheep of the zwart bles breed and because it’s the year of the sheep according to the Chinese astrological calendar.

They’re asking people around the world to submit their Google view of sheep and people are sending in their satellite images from places where you expect sheep to be (like New Zealand) and places where sheep have popped up unexpectedly.

There are sheep from the Galloping Drive in Tregynon, Wales

Here is a view of four sheep in Marsden, England from the Peak District.

Sheep in the shadow of the William Wallace monument in Stirling, Scotland

And a few sheep meandering in a bucolic pasture in New Hampshire.

There are even outtakes of mistaken views of sheep including sheep sculptures like this one from Wagin, Australia 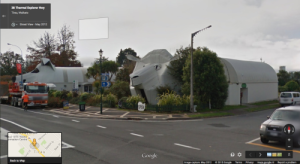