Commit to chocolate this Easter but don’t make a commitment to rabbits.

Of course Easter is the time of year when people’s heart turn to mush thinking, “Wouldn’t it be a great pet to have a rabbit?”

Rescue groups are sending out notices advising people that bunnies often end up abandoned because people don’t want to care for them any longer. 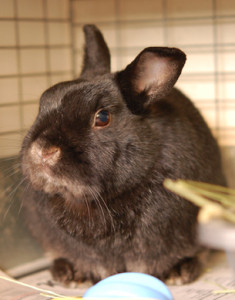 Beside the lifetime cost, there is an initial $200 in one-time costs for a habitat, spaying/neutering, litter box, care book, dishes, brush, water bottle, etc., and yearly costs of approximately $300 for food, annual veterinary visits, and white wood shavings.

Also, rabbits, while cute and cuddly, demand a commitment of care the same or greater than for a cat or dog.

“While often purchased for children, parents overlook the fact that they are the ones that must be regarded as the primary care givers, not the children,” says Craig Naherniak, the society’s General Manager of Humane Education.

Proper care includes regular daily exercise out of the animal’s habitat, daily grooming, a varied diet that includes fruits and vegetables and chew items to keep the rabbit’s constantly growing teeth worn down

Not necessarily the best pets for children

While rabbits enjoy receiving attention and affection from people, most do not like being held or cuddled because it initiates a feeling of being caught by a predator.

Held rabbits often try to escape and can suffer serious injured if they fall or, in the struggle, the child may be injured by the rabbit’s powerful hind legs.

All around major municipalities, there are abandoned bunnies populating like crazy. It’s a bad way to leave domesticated bunnies. Coyotes eat them and sometimes they end up starving to death because they’re ill-equipped to fend for themselves in the wild or in your suburb.

Don’t do it. Eat more chocolate instead while you wait for the desire pass to own a bunny.