I think in his owner’s household, there’s a lot of Oh Finnegan!

The Irish Wolfhound, who belongs to Evangeline Leclair and Reilly Smith, has just been put in the Guinness Record book as having the dog with the longest tail.

Finnegan’s tail measures in at 72.29 centimetres.

Guinness World Records 2015 book recognizes Finnegan as having the world’s longest dog tail. A vet had to measure the tail three times and have a witness present in order to have Finnegan’s tail feat formally recognized.

Smith and Leclair, who were a couple but have since broke up, share custody of Finnegan.

Both say they’ve been hit a number of times in the face with Finnegan’s tail and he’s broken more than his share of wine glasses. 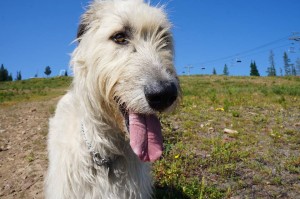 Finnegan’s tail broke the previous record by a Great Dane called Bentley. He had a tail measuring 66.02 centimetres.