“It can take years for wildlife to adapt to new crossing structures like the ones in Kootenay National Park. Yet the first spring after they opened we spotted this… our very first bear!,” Parks Canada spokesperson Tania Peters said in statement Friday. 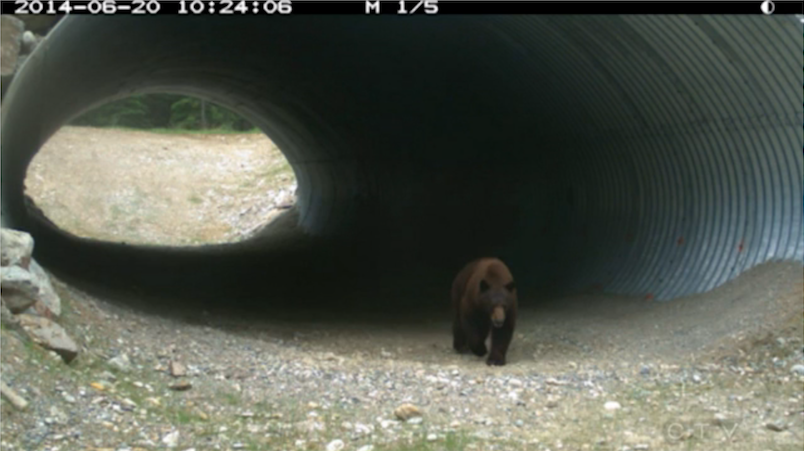 Parks Canada completed the first phases of its wildlife crossing in the park in 2013, and officials were”pleasantly surprised” to discover images taken by remote camera on June 20, 2014 of a black bear in a new underpass. It marks the first time a bear used one of the three new crossing structures.

More than 5,000 vehicles travel each summer day along Highway 93 in the park. To cut down on animal-vehicle collisions – hundreds of animals have been struck over the last decade – Parks Canada adopted the world-renowned model pioneered across the boundary in Alberta’s Banff National Park. Last year, officials built fences and the new crossings on a particularly troublesome 4.7-kilometre section of road.

Earlier this year the park posted this video of a wolf pack avidly using a crossing over winter.

You can learn more about the wildlife crossings here. But the project has been so successful in reducing collisions between wildlife and vehicles, that another $9.6-million in funding was announced to complete the second phase of the Kootenay Wildlife Crossings Project. This is a pretty cool time-lapse video of the construction process.