A Boston-area police officer came to the rescue of a chihuahua named Moochie trapped in a submerged truck. Debra Titus, 59, was driving  her Toyota Tacoma pickup when it went into the water on June 7 in the Massachusetts community of South Meadow Village. She managed to get out of the vehicle along with another dog, Stitch. But Moochie was lodged under eight feet of water. 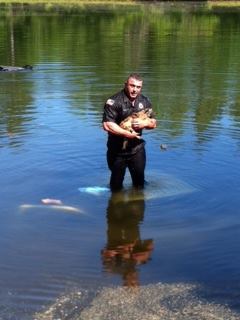 “Officer Harriman, an avid dog lover, then removed his gun belt, gave it to his fellow officer and dove into the murky water. He then managed to open the door and enter the vehicle and retrieve the dog. The dog was returned to its owner in good health but a little frightened,” police said in a statement.

Officer Harriman told the Boston Herald he gave the dog “a little squeeze.” Then, he went to home to dry off before heading back to work. Harriman, who has an English bull dog, later headed out to check on the dog and it was fine.