Four dogs, including a service animal that died in the line of duty, as well as one cat are the newest inductees to the prestigious Purina Animal Hall of Fame.

The awards, which were recently handed out in Toronto, honour animals for their bravery and loyalty to their owners and others.

“Every year, these stories not only capture our hearts, but the hearts of the entire country,” Susan Molenda, Vice President, Nestlé Purina PetCare said in a statement. “This year’s Inductees overcame incredible obstacles such as a vicious black bear attack, a partially frozen river, a house fire and a dangerous criminal – literally putting their lives in harm’s way to keep humans safe.” 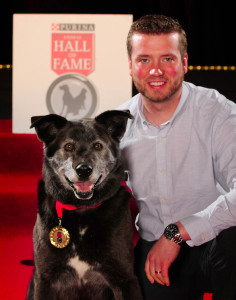 The dog’s owner, Adam Shaw, heard screaming and saw a girl, 9-year-old Samara, floating in the river while her sister, 10-year-old Krymzen, was trying to pull her out, but also fell through. Shaw and Rocky ran to the rescue pulling out Krymzen, but then dog and owner also fell into the cold water. They scrambled to get out, but Rocky went back into the water with its leash to pull Samara to safety.

“Rocky never hesitated to jump in and work with me to pull Samara from an ice-cold river. He was driven to help me save those little girls that day,” Shaw said in a statement. “He is an incredible, courageous animal and is not just a pet to us.”

To learn more about Rocky, you can watch this video.

German Shepherds Jake and Kyra were also honoured for saving their owner, Lynn O’Connor from a black bear attack in Ontario.

The dogs distracted the bear by biting and barking at it until it finally gave up on attacking O’Connor. The bear chased Kyra into the bush, but O’Connor’s husband, Jerry, managed to rescue the the family pet and get his wife to the hospital. Jake died last November of old age, but Kyra took in the ceremony.

You can watch a video about them both here.

Chryl Field, a retiree from New Brunswick, credits Meskie, her 17-year-old cat, for saving her life. 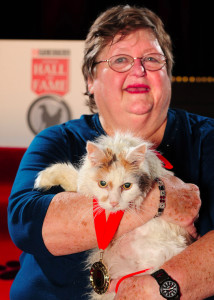 Fields fell asleep in a recling chair last summer to be woken suddenly by Meskie pouncing on her stomach. She got up, followed the cat into the kitchen when she saw that the front of the house was on fire. She called 911, running from the house with her cat in her arms, they got into the car and drove off. Even as she was backing out, the fire was so intense, the paint on the vehicle was blistering.

Learn more about Meskie in this video.

Police Service Dog Quanto was on duty last October when he paid the ultimate price. His handler, Edmonton Police Constable Matt Williamson were pursuing a stolen vehicle, which crashed when the suspect tried to run away. As Quanto tried to take down the suspect, Williamson ordered the suspect to surrender. 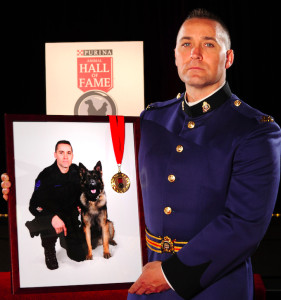 Instead, the suspect pulled out a knife and began to slash at Quanto. Williamson yelled for the suspect to drop it, Quanto released his hold and attempted to returned to his handler.

Other police had arrived to arrest the suspect. Quickly Williamson noticed the blood coming from Quanto, scooped him up and rushed him to a veterinary clinic. The 5-year-old dog couldn’t be saved. vehicle and transported him to the closest emergency veterinarian clinic where doctors were unfortunately unsuccessful at reviving him. You can watch a video about Quanto here.

The suspect was sentenced in February to 26 months in prison for a number of offences including 18 months for animal cruelty. Alberta Provincial Court Judge Larry Anderson called the stabbing “an act of unbridled violence.”

“Your attack wasn’t just an attack on a dog,” he told the court according to CBC. “It’s an attack on your society and what’s meaningful in our society. The hurt from your actions was widespread. It explains why there are so many in the courtroom today.

“We continue to be amazed by the enormous, life-changing impact an animal can have on all of us,” Purina’s Molenda added. “We feel it is extremely important to celebrate the lives of these loved ones. We thank Jake and Kyra, Meskie, Rocky and Quanto for inspiring us all.”