Jung Myoung Sook lives on a hillside in a country where the dogs she shelters are often traded as food.

But to the gray-haired woman, the 200 dogs she has rescued are part of her family. She finds room for them in a hillside compound near Asan, South Korea.

Myoung Sook, 61, has had to move six times because of noise complaints. But to her, rescuing the dogs, who bark and wag their tails as they follow her around. Sometimes she’ll pick up one of them and carry the puppy around. At other times, when Myoung Sook squats down or sits down, they gather around her.

South Korea residents have only recently started having pets as part of their family. For some, they’re still considered a delicacy.

While some of her neighbours don’t like what Myoung Sook is doing, others see her as a champion.

Woman spends hundreds of dollars on food for the dogs

Myoung Sook makes a living by cleaning and collecting recyclables. She doesn’t care about food for herself but spends $1,600 each month on food and medicine for herself and the dogs. She also receives donations of soy milk, canned meat, dog food and pork. 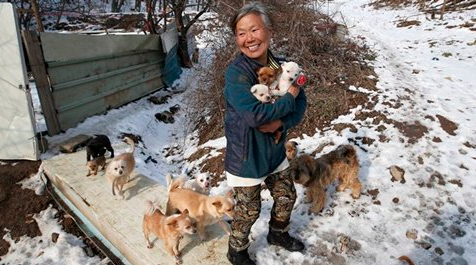 One restaurateur has been donating leftover pork to Sook for four years now. “She lives only for her dogs without doing much for herself,” said Park Hye-soon, the restaurateur, according to the Associated Press.

“My babies aren’t hungry. They can play and live freely here. Some people talk about me, saying, ‘Why is that beggar-like middle-aged woman smiling all the time,’ but I just focus on feeding my babies. I’m happy and healthy,” said Sook, according to the Associated Press.