The killing may now be over, but outrage continues around Japan’s annual herding – and culling – of dolphins in an infamous cove near the town of Taiji. Corralled into a small bay more five days ago, the dolphin pod included infants, a grieving mother to a rare albino calf, most of them destined for slaughter, according to the Sea Shepherd Conservation Society.

A fisherman who is a union board member, who refused to be named, told CNN today that of the 500 dolphins originally herded, less than 100 were captured or killed. Sea Shepherd said on Facebook  that 52 were held captive, 41 were killed and up to 140 were driven back out to sea.

“The killers claim the barbaric drive, starvation, beating, and murdering of dolphins is there culture,” the group said. “However, they continue to try and hide their actions and make millions of dollars off of the captive industry that is used for funding the slaughter.” The group highlighted on particular mother and albino calf.

“The unique albino calf, a rare and lucrative find to exploit as a spectacle in captivity, was the very first dolphin to be snatched away from her mother’s side by the Fisherman and taken captive on Friday and transferred directly to Taiji Whale Museum,” Sea Shepherd said in a statement released Monday. 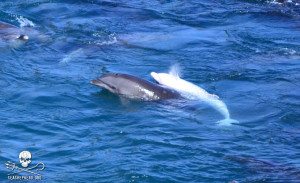 It is onsite reporting on activities as part of its Operation Infinite Patience dolphin defense campaign.  Perhaps overly dramatic in tone, Sea Shepherd cannot be faulted for its passion. The group reported the possible “suicide” of the mother of the albino baby, which was “violently taken from her.” The mother searched for her baby before plunging into the water never to resurface, Sea Shepherd observers said.

“Japanese press is reporting that the mother rejected the calf and so they rescued her, but that is a blatant fabrication as the thousands who watched our live stream of the kidnapping can attest. The baby is possibly blind and/or deaf, as is the case with many albinos. If so, this could be one of the reasons that this terrified calf clung so closely to his or her mother in the cove and now clings to a dolphin companion sharing the calf’s tiny tank,” the group added.

Meanwhile, Caroline Kennedy, the U.S. ambassador to Tokyo, turned to Twitter express her displeasure with the so-called drive hunt, which in turn drew fire from conservative groups in Japan.

Yoko Ono also wrote an open letter to Taiji fisherman and people of Japan urging them to think of the “big picture.”

“The way you are insisting on a big celebration of killing so many Dolphins and kidnapping some of them to sell to the zoos and restaurants at this very politically sensitive time, will make the children of the world hate the Japanese,” she wrote.

Yoichi Shimada, a professor at Japan’s Fukui Prefectural University, told the South Morning China Post that the ambassador doesn’t know much about the history of the practice and that it has been going on for centuries. Dolphins also eat other sea life that hurts the livelihoods of local fisherman.

“Many Japanese are sympathetic towards the local fishermen and they argue that Westerners eat baby cows and sheep, so it is wrong to only blame the fishermen,” he told the newspaper.

The slaughtered dolphins will be sold for meat both for people and as pet food. Some of the animals will wind up in marine parks or aquariums. 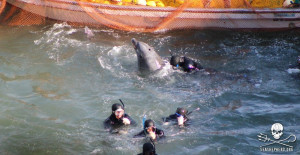 According to Sea Shepherd, the hunt was “virtually unknown” until 2003 when the group released covertly-obtained photographs and video from the cove. It gained further attention around the world when the documentary The Cove won the Academy Award for the best feature documentary of 2009. (Confession: I have not watched this film. I want to, but I can’t. It’s just too sad. Saving Luna  just gutted me – and that was the award-winning documentary about just one orca that died.)

According to CNN, the Wakayama Prefectural Government, where Taiji is located, gave an annual “catching quota” this year for 2,026 small porpoises and dolphins – 557 are for bottlenose dolphins.