It’s a familiar safety message for anyone who travels on planes.

In case of an emergency, put on your oxygen mask first and then help put the mask on a child or someone who needs help.

On a flight this week to Massachusetts from Florida, JetBlue staff helped a passenger in distress, the only one on the flight who needed an oxygen mask.

A french bulldog name Darcy was travelling with his owners Steven and Michelle Burt from Florida when he suddenly had trouble breathing. 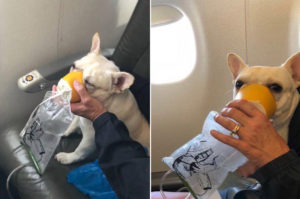 Quick acting staff jumped in. In a Facebook post, the couple thanked Renaud and Diane for their fast response.

We all are affected by cabin pressure and oxygen fluctuations, human, canine and feline, etc., but the fact that the Attendants were responsive and attentive to the situation may have saved Darcy’s life,” Michele wrote on her Facebook page, ABC News reported.

Darcy was treated for hypoxia — a lack of oxygen in the body — by her owner who held the oxygen mask over the dog’s face.

“I placed the mask over her face, and within a few minutes she became alert and after a short time she didn’t want the mask,” Michele said.

“I believe [crew members] Renaud and Diane saved a life, some may reduce the value of the life because Darcy is a canine. I do not.”

Burt thanked the JetBlue crew for helping Darcy during the trip. French bulldogs with their flat noses often have breathing difficulties.

Airlines have in recent years started banning pets after a number of high-profile deaths and other incidents in-flights.